Our antagonist got drunk at a restaurant and decided to show off his worthiness by firing live ammo into the ceiling to scare other patrons. He then left the restaurant in a BMW and accidentally shot himself in the knee while driving.

He went to a hospital and told the police that he found a gun while walking on a bridge and accidentally discharged it. He got busted after some forensic examination. A felony case is launched. 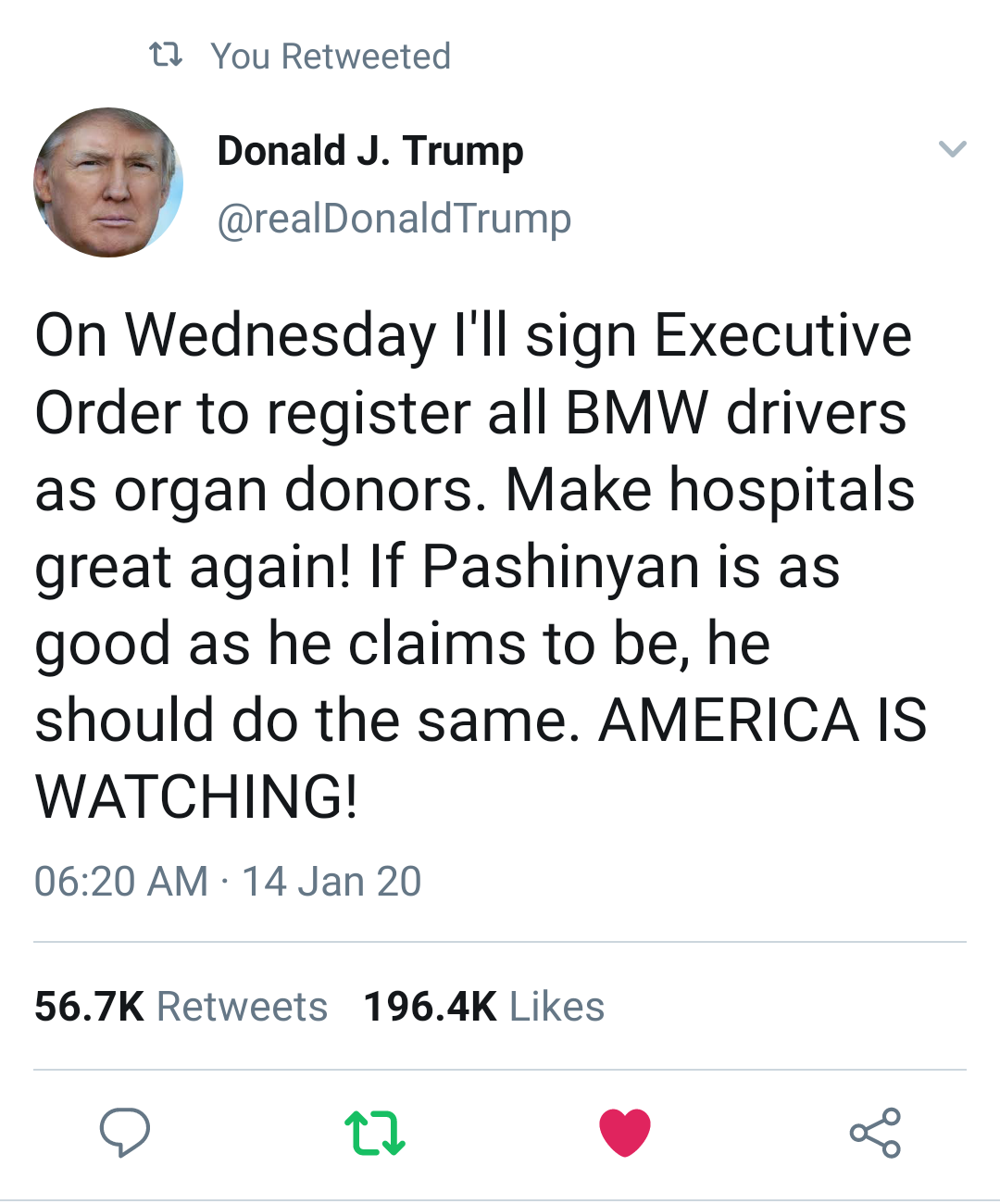 A businessman was doing illegal construction and sales of properties in Yerevan. In 2013 his activities were discovered and stopped by local district officials. The businessman gave a $3k bribe to the official and continued his work. A felony case is launched.

Hakan Sukur is probably the most famous Turkish soccer player that Millenial Armenians remember. He played in Inter, Tornio, etc. He is Turkish soccer's best striker.

Sukur is currently in the US, working as a taxi driver to make ends meet. He blames Erdogan for "ruining his life". In 2016 the Turkish regime began persecutions against him and his family for opposing Erdogan's administration. He was deemed as a supporter of a "terrorist group", among many others after a failed coup in Turkey. He was later charged for "insulting Erdogan".

The Roboserj outlet found a commercial area on paper's website which allows you to post your stuff for $14,000 and assumed that the Pashinyan administration used this service.

In 2019 the govt introduced the agricultural insurance system. Farmers in 6 provinces (later more) are able to insure their crops. If the farmer insures against hail, fire and freezing (3 types) the govt will subsidize 50% of the fee. If insured against 2 types, the govt subsidized 60%.

Once the insurance system is implemented, if the crops are damaged by nature, Govt will no longer simply give cash compensation (equaling 5% of damages) to farmers as it used to. Famers will need to be insured.

100 farmers have applied and will receive coverage in February.

3 mining companies lost their license in 2019

In 2017 the Khosrov forests caught on fire. It began in Aug-12-2017. Two days later Armenia realized its unstoppable. They asked Russia for help. il-76 jets made round trips dropping tons of water. 2,000 hectares were affected. Some areas were saved by firefighters by blocking the fire's path.

Today the bushes and grass have all recovered. The rest are also growing back, with the exception of juniper trees that need decades to fully reproduce. These juniper trees were 300 years old and were supporting the black vulture (bird) population. Other trees such as oak, apple, etc. are recovering quicker. In many cases, the fire killed the upper tree but didn't harm the roots beneath the soil.

Nature Protection agencies have strict monitoring against human activities to prevent intervention. They can't go plant new trees or clean up the ashes. The forest knows how to recover itself (looking at you Australia).

After the 2017 wildfire, there was a charity hotline set up by the scientific department of Khosrov forests, but only $10 (ten dollars) was collected. The govt didn't provide support at the time, according to a scientist. The department received the necessary equipment as a charity from some firm.

Around this time the nature protection agency was short in fire equipment and begun receiving donations. Today they're better equipped and won't face the same issue. Some of the equipment includes giant buckets near water sources that are constantly filled with water and ready for use, water hoses, soil removal equipment.

When the fire broke out, it happened from multiple places simultaneously. There were rumors that it was a deliberate arson. The scientist is skeptical about arson theory, saying the law enforcement at the time did an investigation but couldn't figure the case.

Some scientists at the time believed it was arson because although it was a dry summer, other external factors were needed for such a fire to happen. Then-Nature Minister ARF Artsvik Minasyan said they'll need to wait 1 year to assess the situation fully. The scientist says, however, even today it's hard to get the full picture.

Below is a security camera footage from the Khostrov forest. It captures the snow and...... a leopard? lynx. A very good girl.

There is a program called ArmAt, subsidized by the Education Ministry, which promotes tech and robotics in schools across Armenia by installing labs.

CEO of Union of Leading Technology Enterprises (hereby ULTE) Karen Vardanyan says someone within Education Ministry is sabotaging this program to ends its funding, even though the govt earlier publicly announced the program's expansion. He says the Education Ministry's plans don't mention the creation of new labs for 2020 (disputed as false), and that Ministry is trying to get him (CEO Vardanyan) fired by pressuring the ULTE.

Education Minister Arayik Harutyunyan dismissed it, saying "in reality, there are no problems with the program."

In 2019 we announced that every school should have such an engineering lab. When we got extra money, we gave 800mln for 284 labs. 2019 ended with 575 labs located in 1400 schools. (Q: but Vardanyan disputes that number. A: the number comes from ULTE itself)

This is an unprecedented thing. Few countries in the world have such a program at this scale. It's important for STEM.

How was the program implemented in the past?

ArmAt's authors themselves would find resources for installing labs, while the govt would pay for some staffing. The govt never gave money for retraining or education camps. It was all funded by ArmAt.

I don't know why Vardanyan won't mention this, but we held a meeting and spoke about this in late-2019. During the meeting, I asked ULTE to use the extra money under their possession on retraining, and they said they've already done its 1st stage, and will do one again in March 2020. We agreed to discuss more in early-2020.

Often we're (Ministry) accused of buying things from 1 source only. Now we're taking steps to end monopoly in this field. If ArmAt wins the auction for the license to install future labs, then they will continue to install new labs. The existing labs built by ArmAt will work either way. Every school must have one, that's our goal.

Q: Why is a need for an auction? ULTE is behind the original idea of this lab thing. Is it possible Ministry would pick another institute?

A: We have dedicated more money for 2020 to build more labs. There needs to be a competition among companies that want to build the labs.

Education Ministry's reforms increased a budget (3x) for compensating travel costs for students and teachers. From now on, all provinces will qualify instead of the previous 7.

Beginning Jan-2020, more provincial students and teachers, who have to travel to a nearby settlement, will receive a travel subsidy.

The birth rate is still in decline in Armenia. Earlier, some experts said it's heavily influenced by the 1990s war and economics. At the time the Birth rate got lower and emigration rose. People who were supposed to be born and stay in Armenia in that period would have been in the family-making age by now, so their decline influenced the future generations.

Healthcare Minister Arsen Torosyan says the decline, however, is reducing. "If it continues like this, the decline will eventually stop. We're trying to provide high-quality services to pregnant women. In 2020 we'll build 6 new medical centers and repair 4, in provinces."

84% of kids adopted by foreigners had health issues.

Only 22% of kids adopted by locals had health issues.

82% of adoptions were by foreigners.

60% were from Yerevan. The majority were from Yerevan Mankan Tun organization, whose director is currently a suspect in the infamous child trafficking investigation launched a few months ago.

44% of kids came from single-mother households.

30% had both biological parents

Ryanair lands in Armenia after some delays. The jet was welcomed with firefighters pouring water on it, a symbolic thing. Welcome, Ryan! Very cool.

The number of people arriving in Armenia

What was the difference in IN vs OUT?

Arrivals for the 4th quarters alone:

Numbers are for each person. If you travel several times you're only counted once.

National Post: Cook this: Lavash — griddled flatbread — from a reflection on Armenian food of the same name