It turns out Armenians captured a new position and its surrounding territories on Mount Qaradas (Qara Dash) near the Movses, Chinari, and Agdam (AZ) villages. LINK

An approximate map of the new position: 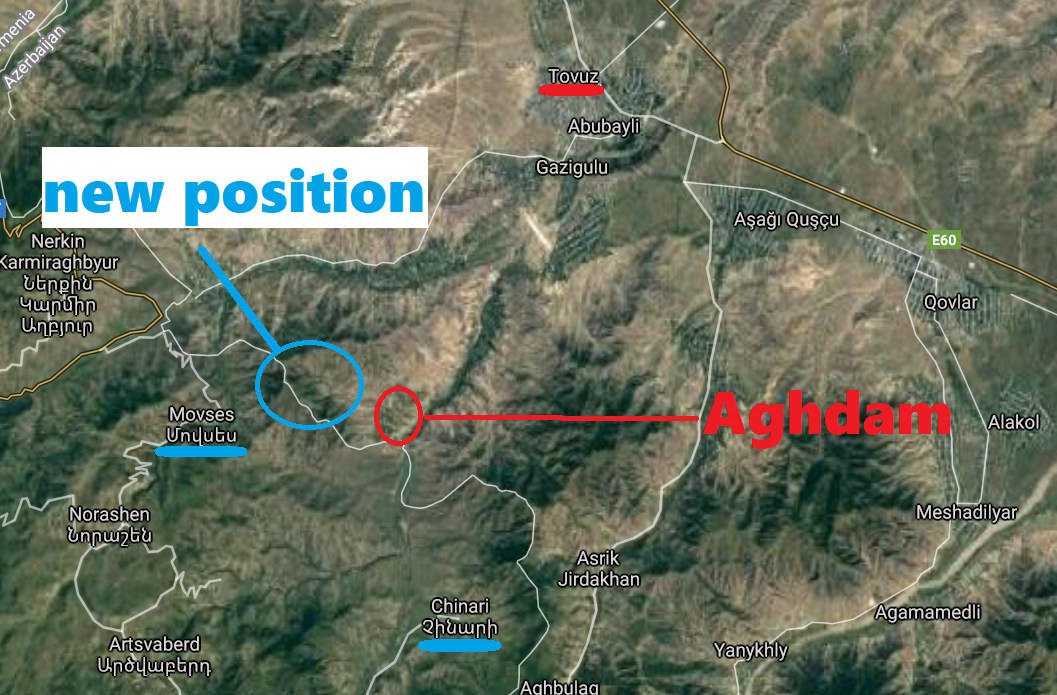 Political analyst Shirinyan: the Chinari region, where these battles happened, has been the most vulnerable point on the Armenia-Azeri border since the 1990s. The liberation of the outpost is huge.

Two Azeri positions were destroyed. They're being renovated under the Armenian control now. As a result, 2 other Azeri outposts are left dangerously isolated from the rest.

The new outpost is the higher ground. It makes the Baku-Ceyhan pipeline vulnerable.

Kudos to the illiterate former Armenian Prime Minister Hrant Bagratyan for earlier saying "if I were Aliyev I'd attack Armenia now because Pashinyan has ruined the country."

Azeris tried to use a tank but its movement was suppressed by Armenian fire. https://www.armtimes.com/hy/article/192545

Militaryman Artsrun: Azeris haven't capitulated yet. Despite massive losses, they still fight because they have weapons. Don't spread their propaganda; we've dealt them a much bigger blow. https://www.armtimes.com/hy/article/192554

Azeri hackers once again spread misinformation about a large number of Armenian losses. They used hacked accounts, or sometimes new accounts disguised as Armenian. They spread the names of Armenian soldiers who died in 2016. https://www.armtimes.com/hy/article/192573 , https://armenpress.am/arm/news/1021643.html

Army: Azeris used a drone to attack civilian infrastructure in Berd village (10km inside). The area near the gloves factory was targeted. No injuries. https://twitter.com/CineSeda/status/1282942006805889026 , https://www.armtimes.com/hy/article/192556

Armenian MFA condemned the attack on Berd village. "The Azeri side will bear full responsibility". Berd is 10km inside Armenia. It is the first time it was targeted since the 1990s.

Video of how Armenian army destroys Azeri outposts from which they fired at Armenian civilians. 'They have more casualties, definitely," said Artsarun.

Armenian army shot down an Azeri drone that was used for coordinating an attack. Other drones were shot yesterday.

A sad day for Israeli military ingenuity. The Armenian army shot down an Azeri drone Elbit Hermes-900, "possibly the first-ever downing of this drone in the world". This is Azerbaijan's biggest and most expensive drone. It costs ~$30mln.

Armenia used drones Made in Armenia during the combat, for the first time. It is believed that the drones coordinated the attack that killed the Azeri high-ranking military officials. Here is example footage recorded by the Armenian drone: https://youtu.be/ahHAZj8ubUM?t=4 , https://armenpress.am/arm/news/1021688.html

Chinari villagers describe the events and continue their farming while the battle continues not far away. War footage: https://youtu.be/KwT4VPLHUqM

This resulted in Azeri users seeing the Armenian flag while vising Heydar Aliyev's library website and other destinations.

Armenians sustained 4 deaths (a Major, a Captain, and a few conscripts), while 5 were lightly injured yesterday. None of the deceased conscripts were in the immediate front line.

Azeri Major General Polad Hashimov was killed. He was leading the 3rd Corps.

Azeri Colonel Ilgar Mirzayev was also killed. He led the artillery unit that was firing at Armenia.

Azeris sustained 7 new deaths today, many of them Majors, bringing the number of deaths to 11 since the start of Tavush Battles. Azerbaijan claims 1 civilian was killed in village Agdam.

U.S. State Department condemned the violence on the border and urged ceasefire. https://www.armtimes.com/hy/article/192547

Kremlin is "deeply concerned" and called for a ceasefire. https://www.armtimes.com/hy/article/192583

Armenian envoy to Russia-led CSTO military bloc asked the bloc to show some support for Armenia as regulated by the bloc's rules: https://factor.am/268710.html

U.S. Senator Ed Markey: I stand with Armenia as they protect their territorial integrity. https://www.armtimes.com/hy/article/192549

U.S. Senator Representative Frank Pallone: Azerbaijan is once against trying to start a war. https://www.armtimes.com/hy/article/192551

A group of German volunteers arrived to help against COVID.

Months earlier the NSS busted a scheme by several medical officials who allegedly convinced mothers to give away 114 newborn children after lying to them about their children having severe medical conditions. The children were sold to foreign adopters.

The report says: it turns out Ministries and other govt employees were also involved. They laundered the cash received by the adopters.

The clinic workers lied to parents about their children being born with defects to convince them to abandon the children, while the govt officials made sure the scheme isn’t busted.

...with forging documents to claim his state-issued iPhone broke so he had to throw it away, while in reality, he gave the perfectly functional gadget to his son, say, investigators.

Chkalovka's 3 roads and the square will be renovated, for the first time since 1988. https://armenpress.am/arm/news/1021664.html

Sarukhan village will have a renovated irrigation system as part of the infrastructure grant. https://armenpress.am/arm/news/1021626.html

The finale was between Ararat-Armenia and Noah. The former won the tournament after a 2:0 victory. This is Ararat's second consecutive champion's title.