More details emerge from the terminations of 7 high ranking regional police chiefs few days earlier. It appears that this was done to combat the practice of obtaining driver's license in exchange for bribes. All the terminated members were officials from driver's license issuing departments. Around 70% of Yerevan license exam goers pass the tests from the first attempt, while that number is close to 100% in the regions where the dismissals took place. Many Yerevan residents know that in the event of failing the test in Yerevan, you can go to the nearing province and buy the license from them https://news.am/arm/news/462822.html

Dozens of business deals were issued to private companies to do works in provinces. Some of them had shady practices. One company ("Shahart" Inc.) embezzled AMD 43mln. Criminal case is launched https://www.youtube.com/watch?v=FtYkOat68AA

H1 news administration denies the claims that 7 employees were fired for their political views. Points out that no one was hired in their positions. They were terminated for saving resources. https://www.youtube.com/watch?v=cGUjPyHFycQ

A citizen informed the police about a corruption in Yerevan school N46. Investigation discovers that the former director abused his powers and embezzled AMD 7.6mln, registering relatives as employees and paying them salaries, without them working at the school. AMD 4mln has been recovered so far https://armenpress.am/arm/news/941478.html

13 high ranking judges, prosecutors and citizens will be tried in a corruption case in Gegharquniq Province. The citizens bribed the judges with large sums to prevent their relative from going to jail. The case was launched earlier but was under closed doors. It will re-launch on August and it will most likely be open for the public https://news.am/arm/news/462875.html

The American University of Armenia organizes the first ever large scale student-employer meetup. Hundreds of students will receive an opportunity to get job offers from dozens of corporations, mostly from the tech field https://news.am/arm/news/462877.html

Public Survey: What do Armenians think about the affordability of healthy food? Most believe that in average of AMD 4,000 is needed per day per person https://www.youtube.com/watch?v=gGJTMr-WO4g

Tourists and locals in Yerevan talks about their impressions and what they like the most https://www.youtube.com/watch?v=mQwCKglUeOs

Increasing number of people now believe that what took place in Ganja, Azerbaijan was not a radical religious terror, as the Azeri government tried to portray it to be in order to hide the true nature of the situation. The shooting of the mayor (Elmar Valiyev, Azerbaijan's Manvel Grigoryan but hundred times worse) was an act of a desperate man who found no other solution to end the corruption and unlawfulness in Ganja. The residents of the city have long complained about the illegal actions and bad management of the city administration. There is no evidence that the shooter was trained in Syria, had radical religious views, nor was trained by the Armenian or Russian secret services. Parallels can be drawn between that incident, and Sasna Tsrer's hostage takeover of a police station in Yerevan, and subsequent march by dozens of thousands of Armenians to end the regime.

The protests that took place in Ganja few days after the assassination attempt were organized by ordinary citizens who were also fed up by the corruption in the city. The policemen were killed during a confrontation after they attempted to disperse the crowd. No evidence that the protesters went there with the intention to harm anyone or destabilize the country. The Aliyev administration is afraid of this form of uprising, which is why the protesters were portrayed as terrorists and foreign agents.

Armenian Defense Ministry spokesman reminds Azerbaijan that Armenians also monitor Azeri cities in Nakhijevan, after Azeri media spread propaganda last month about being able to see Armenian villages from the border. Spokesman shared a photo of Ordubad city of Nakhijevan, which is 9km away from the official border. 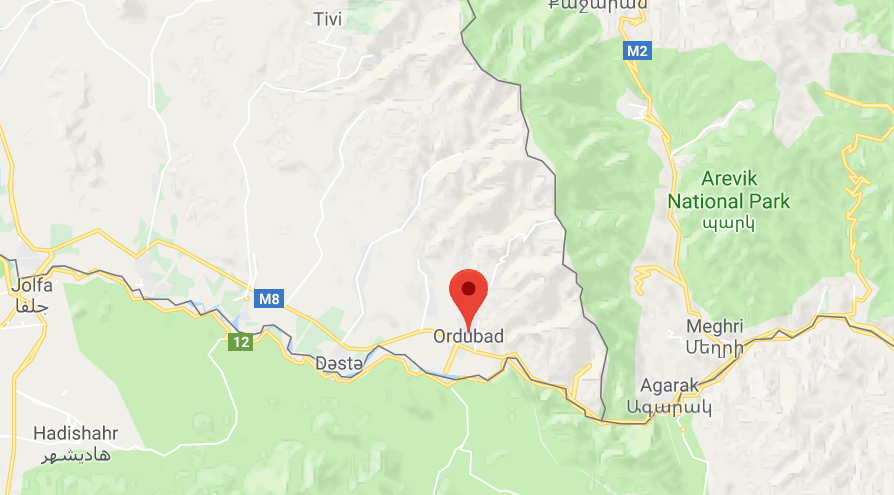