On Saturday, anti-Roboserj outlet 1in.am reported that some people placed a carton of eggs near their office door. 1in believes it was an intimidation tactic by Roboserj activists.

1in.am outlet published a report saying that CC chief Tovmasyan has a shady property transaction history that are not properly reflected in his official records. (Tovmasyan had earlier served as HHK Justice Minister and at other positions in Parliament before being placed in CC.)

Tovmasyan's residence is a 213m2 property on Buzand St. He bought it for 83mln in 2013. He then bought an adjacent 66m2 for 27mln and registered it under sister-in-law's name. The property was renovated by Tovmasyan.

Sometime later, Tovmasyan bought another 131m2 property for his sister-in-law, on Alek Manukyan St. It only cost him 3mln. The documents show that he acted as a representative of the seller.

This property was purchased by someone in 2006 for 52mln. In 2009 it was sold for 3mln. Tovmasyan obtained it, and for many years, while he was HHK Justice Minister, he leased it to govt-run Notary Services institute.

(Side Note : Tovmasyan's godson, formerly working under Justice Ministry, was recently arrested under the suspicion of forcing subordinate notaries to falsify documents to embezzle expensive properties under low prices. https://armtimes.com/hy/article/170628)

Back to our story...

Tovmasyan has other properties, too, according to 1in. He has a 22m2 parking lot on Buzant st. Tovmasyan's niece bought this parking in 2014 for 12mln and 4 days later gave it as a gift to Tovmasyan's daughter.

The same niece purchased a Nissa Sentra car in 2014 for 9mln and gave it as a gift to Tovmasyan's other daughter.

1in.am accuses Tovmasyan of being the owner of these properties and not declaring them properly. It questioned the sources of Tovmasyan's income.

The prosecutors will examine 1in.am's report

Hrayr Tovmasyan spoke with with press about his upcoming impeachment hearing, properties etc.

The Constitutional Court members held a session and decided to reject Parliament's petition's acceptance into the court. They won't even discuss whether Tovmasyan violated rules. Tovmasyan will not be removed from his position.

Tovmasyan and the new judge Vahe Grigoryan were not present during the session.

The Parliament's Legal Affairs chief Vladimir Vardaynan has accused the Constitutional Court of avoiding its duties today, and in several other instances in past. "The CC doesn't want to do its job."

The map of Syria-Turkey conflict. (may change by the time this is published) 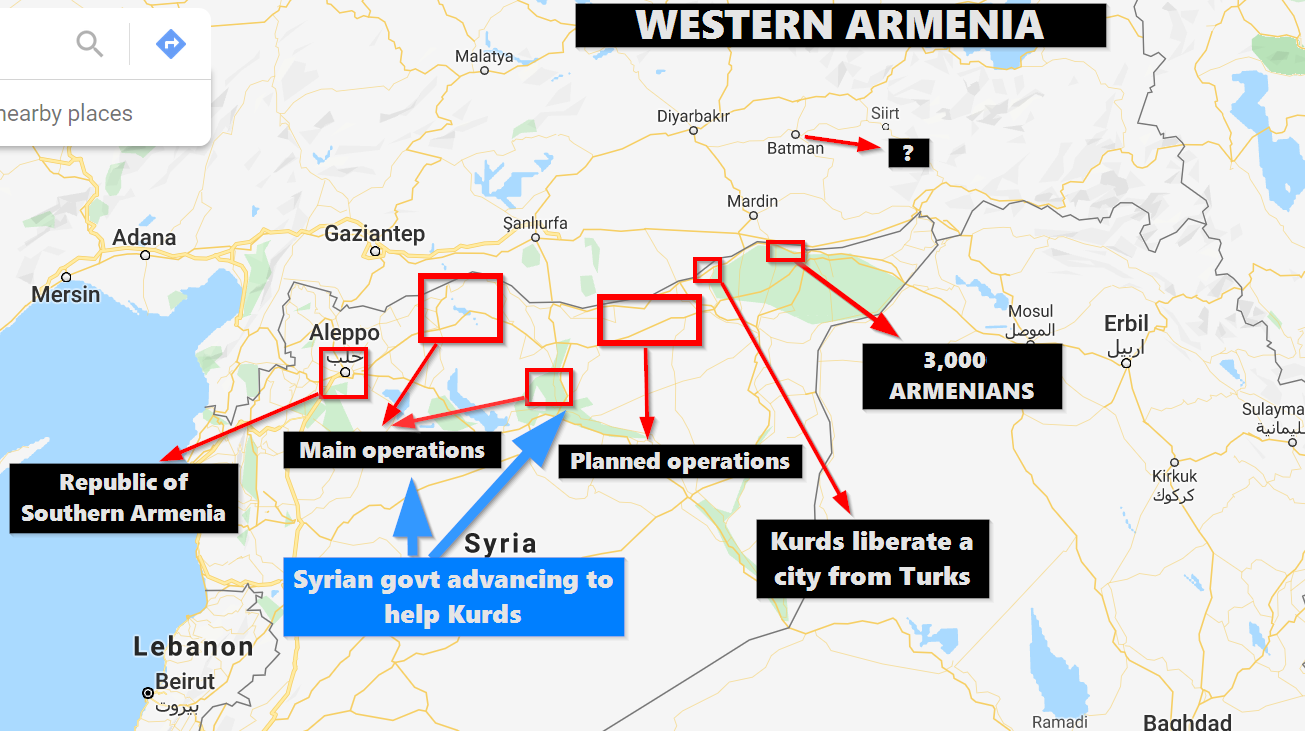 Germany and France will stop supplying weapons to Turkey. Germany is Turkey's largest weapon supplier. UK will not help Turkey with the military actions. Germany has warned that the invasion will lead to humanitarian crisis and the rebirth of ISIS.

Holland's House of Reps passed a bill asking the govt to end the military supply deal with Turkey.

NATO is concerned with the Turkish invasion and the possible escape of ISIS prisoners. "Turkey should cooperate with others and not cross the line", says NATO.

Turkey's Erdogan accuses NATO of not helping Turkey while allegedly being obligated to do so. He speculated that it might be because of Islamophobia, because Turkey is the only Muslim NATO nation.

Donald Trump: Turks and Kurds should make sure ISIS prisoners don't take advantage of the situation and escape from prisons. (Context: there were reports yesterday about a group of ISIS escaping a prison)

Trump: the treasury is ready to implement sanctions. There is a bipartisan agreement between both parties in US.

EU: the Turkish invasion of Syria is a direct threat to EU.

Syrian army is moving north to block the Turkish advancements, after making an agreement with the local Kurds. Syrians enter the cities of Manbij and Kobani, which are currently under Kurdish control, with the purpose of preventing Turkey from taking over. City of Tell Abday went from Kurdish to Turkish control earlier.

Update: Syrian army has assumed positions near Manbij. They're moving to Kobani. https://razm.info/138396

Erdogan has vowed to continue the military advancement on these cities, saying that Russia, being the Syrian govt's main ally, is OK with the Turkish advancements.

"We are coordinating with the Russians," Erdogan said. "There is a lot of gossip now, but it seems ... there won't be any problem in Kobani with Russia's positive approach as of now"

Death count from the beginning of the invasion varies depending on source. Kurds have between 56-550 deaths. Turkish side has around 19.

Turkish regime has arrested a Saudi journalist in Turkey for covering the military operations.

Qamiscli city is east from the main battles. That's where 3,000 Armenians live. MFA says they are safe. Currently there are no evacuation plans.

A French delegation went to Artsakh Republic, signed a deal to open a Frankofonie center in Artsakh. Present were the mayors of Bourg-lès-Valence and Arnouville French cities.

Red Cross threw a charity party dedicated to Armenia. Part of the collected money will be used on elderly programs in Armenia. First lady Anna Hakobyan and Catholics Garegin flew to Switzerland to participate.

Anna Hakobyan denied rumors by Roboserj outlet Live24 that she allegedly used a government jet to fly there. The outlet cited its "reliable sources".

Hakobyan says she flew and returned with economy class. She met Catholicos Garegin in the same jet. They struck a conversation, during which Garegin wanted to know if last year's rumors that Anna flew with Azeri 1st lady Mehriban were true or false. Hakobyan told him the rumors were false. "Catholicos was surprised because he trusted the rumors that he heard from others without questioning whether they could be made up", says Hakobyan.

WARM UP THE HELICOPTER, BOIS. WE NEED AN AERIAL SURVEILLANCE TO SEARCH FOR A MISSING CREDIBILITY BELONGING TO OUR SOURCES!

On Saturday, PM visited the "My Step for Aragatsotn Province" business forum. It's a tradition in which every few months the PM visits a new province, speaks with businesses, encourages investments.

30 business plans were presented during the meeting. A $60mln electricity project investment will be made by a company in the province next year.

Armenia-based tech firm SCYLLA has patented a technology in US. The software taps into any surveillance camera and scans for people holding guns or being engaged in suspicious activities.

Garbage company Sanitek has begun the process of suing Yerevan city in an international court, after it had its contract terminated for failing to carry out the duties.

Some people are keep burning down the new garbage bins purchased by the city. This is the 4th incident in the past few weeks. Malatia district admin has contacted the police.

Deaths in the military are down 22% YoY.

A public awareness campaign against selective abortions was held in Victory Park. The tallest "Mother Armenia" statue was projecting a message saying that Armenia is on the 3rd place in the world with the level of selective abortions, in which a parent chooses to abort the child if it's a girl.

1,300 girls do not born in Armenia each year, and 40,000 weren't born in the recent recorded history. It negatively impacts the future demographics.

The other "leaders" in selectiveness are China and Azerbaijan.

Finance Minister Tigran Khachatryan says Pashinyan instructed the creation of 10 groups to meet various Armenian businesses, producers and exporters, to discuss their problems. The meeting allowed them to understand 100 problems the businesses face.

The overall investments have increased in 1H19vs1H18, but not at the rate we would like to see. The net foreign investment flow had a positive $202mln mark in 1H19, while a negative $51mln (outflow) in 1H18.

The investments equaled to 17% of the size of GDP. To achieve a 10% economic growth, we need that investment ratio to be 29%.

Exports to EAEU trade states rise 11%. Some problems remain. For example, are Armenian exporters being treated same way (fairly) as exporters from other countries, while entering Russia through Georgian Lars customs? "We haven't utilized the full potential of EAEU yet. We can have an electronic system that allows our trucks to more easily enter Russia upon obtaining a permit while in Armenia", said minister.

Moody's upgraded Armenia's credit rating from B1 to Ba3.

For the first time, Armenia got ranked in OECD investment index that allows foreigners understand how Armenia works. Armenia placed in top 10, out of 70 nations.

In global tourism index Armenia moved up 5 positions, to 79th out of 140.

Pashinyan: tourism growth in 2020 will remain high. I ask for taxi drivers and ordinary citizens to treat tourists with respect. Same applies to those in provinces because tourists who visit Yerevan also travel to provinces.

Turns off the ախպար accent, gets a 50% instant discount https://armtimes.com/hy/article/171554

Minister of High Tech: the govt is working to include Armenia in "Union Pay" system. This is what the Chinese tourists use abroad. It'll increase tourism from China.

Armenia is on 3rd place in the group, behind Finland. Top 2 teams proceed. Armenia must beat Finland tomorrow.

Where is Henrikh Mkhitaryan? That's right. Injured again. Sitting on the bench.

But do you know who knows how to play sports?

Vanadzor city will have new colorful fountains with laser effects. It's being experimented. Supposedly one of a kind in the whole region.