US House passed the bipartisan resolution with 405-11 vote to recognize and condemn the Armenian Genocide. This was the 4th attempt since 2000.

Notable opposition came from Mike Pence's brother Greg Pence (R-IN), and from Ilhan Omar (D-MN). "It should be done based on academic consensus outside the push and pull of geopolitics", said Omar mimicking the Turkish stance. Omar also complained about the bill bot recognizing "Indigenous American genocide". Shehad earlier met Turkish president Erdogan, after which Turkish organizations urged to lobby in her favor.

Speaker Pelosi (D-CA): "Today, let us clearly state the facts on the floor of this House to be etched forever into the Congressional Record: the barbarism committed against the Armenian people was a genocide"

Turkish MFA called the vote "shameful decision of those exploiting history in politics". Turkey summoned the US ambassador for explanations. Erdogan said the vote won't change Turkey's stance. Azeri MFA said they don't accept it, calling it "fictional and biased". 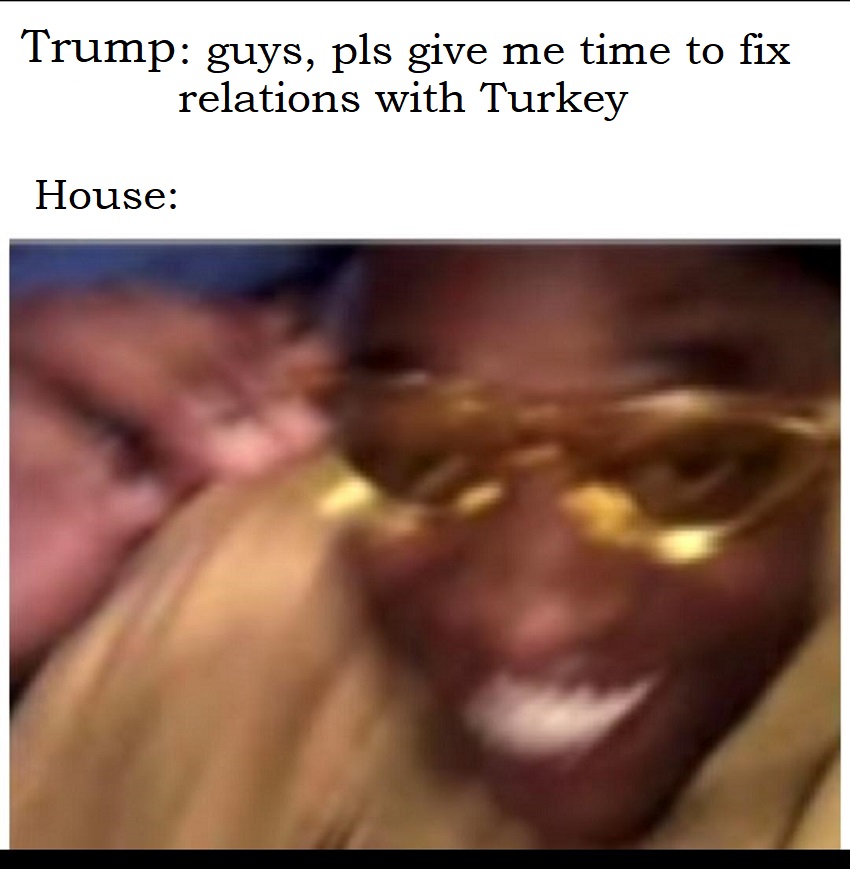 Turkish MP Garo Paylan: the only Parliament that can heal the wounds of Armenians, is the Turkish Parliament.

Singer Serj Tankian: this is a victory for justice. Now it's time for Senate to pass it.

Senators Chris van Hollen and Elizabeth Warren have urged Senate to take a vote and recognize the genocide.

Don't get too excited yet, says the director of The Armenian Genocide Museum-Institute. This vote is House's initiative, does not have a legislative power, and neither Senate nor White House have to pass a similar measure.

Diaspora affairs chief Zareh Sinanyan: this was not a joint resolution by House and Senate. It wasn't presented to both Senate and House. It was a resolution done just by House. A similar resolution was separately proposed in Senate but it did not proceed to the final stages. It's very hard to pass such a resolution in House, Senate and White House.

Armenian MFA and Pashinyan thanked the House for recognizing the genocide.

The Nature Protection Ministry has prohibited Amulsar miner Lydian from draining 40 liter/second water from the nearby river Darb, after examining the river and learning that the area of proposed drainage was already too throttled.

Investigative Committee will question ELARD nature examiner as part of the ongoing investigation to find out if info was hidden by the previous govt to give miner Lydian a green light.

Prosecutors cooperated with Education and other ministries to audit a sale of a property by a state-owned Tsakhkadzor Sports Complex.

In 2006 the Complex signed a 50 year contract with a Firm to lease its property to the Firm. The audit shows that the Complex got a suspiciously "bad deal" as a result.

In 2010 the govt authorized the Complex to sell the Firm an adjacent land for 542mln. The govt let them keep the lease of buildings, saying that the Firm had already invested 3.4bln into Complex.

Audit revealed that the mentioned investments weren't done. Also, a 738mln job done by Firm was kept hidden from IRS.

The 542mln property sale was also found to be illegal because the property's real market value was 1.8bln. (A 1.3bln damage to state)

Moreover, the Firm operated the building between 2010-2018 without paying 704mln in fees.

A felony case is launched against former Ministry of Sports officials and the management of Complex for causing 2bln damage to state.

Update: the police earlier busted a car traveling with illegally cut trees. It appears that the illegal logger was a forest protection agency worker. 💅

QP MP Kristine Poghosyan had her car broken into twice, while parked in different locations. She suspected political motives after the second incident occured.

The police, however, busted the second incident's burglars and they turned out to be serial law-breakers who committed similar crimes in past.

Azeri army opened fire towards villages and trenches with north-eastern Armenia border over night. A fire was returned. No casualties. Army says the Azeri side is provoking due to the ongoing summit held in Baku featuring CIS (former soviet) country defense ministries. Armenian delegation refused to travel to Baku.

The ceasefire violation happened approximately near the area where satellites earlier showed that Armenia advanced its positions by 1.5km, and Azeris by 0.5km, in recent times.

Few weeks ago a fight broke out between a group of drunk soldiers and Vayots Rzor governor's aide. The aide punched one soldier whose life was barely saved, who is still in hospital.

At the time, few soldiers said the governor himself was present and involved in the fight. The governor denied participating in the fight, but soon resigned over the scandal around his name.

Today, the investigative committee said they have an unedited footage from a CCTV, which shows that the governor was not present during the fight. He left his apartment building ~22 minutes after the police received the report about the fight.

They're investigating the "discrepancy" with participants' testimony.

Some parents, NGOs, ethnic Yezidis and others have long complained that the govt is breaking the Constitution by requiring every school kid to study the separate Armenian Church History subject, during which kids are told to pray and do other religious stuff. The classes existed for 15 years.

The Education Ministry is thinking about removing the subject from the school curriculum, while merging content from the church history to Armenian History books. They say it'll be more efficient.

There is a group earlier created by Pashinyan that is working with the church to discuss similar topics. If the Ministry decides not to merge the subjects, at minimum they plan to address some of the complaints, by renaming the subject's title and by setting some rules on how its taught.

The changes will allow Armenia to comply with the European economic cooperation requirements, which discourage certain types of "propaganda".

(Search "Toledo Guiding Principles on Teaching about Religions and Beliefs")

Prime Minister's office is thinking about buying a new jet for PM. The office says the current jet is old and requires lots of money for maintenance. It also has a problem with traveling over the Atlantic Ocean. "We'll try to sell the old one after buying a new unit", said Aghajanyan.

"The PM has a new work car. The old one should have been decommissioned 5 years ago. It wasn't being used by previous govt because of poor quality. Serj was using his personal bullet-proof car", said Aghajanyan.

Investigative Committee budget down by 110mln.

PM office budget to rise by 4bln. Most of it will be used on non-administrative purposes (budget for some projects).

The police has accepted several suggestions from the Human Rights Ombudsman office.

Police's detention centers will provide the female inmates with tampons, cells will have a controllable lighting system so the lights can be dimmed at night so inmates can sleep, the walking area should have some sort of physical training equipment, they'll work on a law to standardize health exams of inmates, the glass barriers in meeting rooms should be removed to let the family physically touch the inmate.

The Spice of the Day award goes to...

Political analyst and journalist Styopa Safaryan, the brother of a March 1st victim lawyer, had earlier reported to the police that he was attacked by two people in his apartment complex building's entrance. His iPhone was stolen.

Parts from his interview with CivilNet...

The attackers took his phone, but the way the event was set up, with accomplices waiting in a car, made him suspicious that it was a politically motivated attack. At the time he blamed Roboserj circles with being behind the attack.

He was able to identify one of the attackers very recently, who happens to be the same Roboserj activist who is currently behind bars for following and harassing the judge who jailed Kocharyan. (During his encounter he didn't know the attacker, but after seeing the judge's incident on internet he identified the same individual.)

He hired private detectives who found that he was supposed to be attacked in Tavush region, but due to changes to his plans the attackers' plan was ruined and they had to encounter him near the Yerevan apartment. The detectives were also able to identify to whom the stolen iPhone was later sold to.

It was also revealed that this group, apparently consisted of 6-7 people, went to Safaryan's house in Noyemberyan and circled around it.

Safaryan says they found that Kocharyan's son visited the perpetrators houses to presumably provide aid to them.

Safaryan sent a letter to PM Pashinyan and the security services.

Watch the video for detailed story.

During a private press conference held on Monday, Safaryan refused to invite several Roboserj media outlets to the event, saying that he only invites "real journalists". Two of the non-invited outlets, 5th TV and Livenews, decided to defy the "ban" and tried to enter the room later. His event was live-streamed on the internet for free, so these outlets could have just copied it, said Safaryan.

(Safaryan is an outspoken Kocharyan critic. Few months ago he accused Kocharyan of receiving aid funds and embezzling them during a highway construction near the Armenia-Azerbaijan border.)