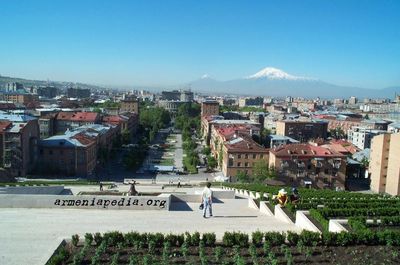 A new pedestrian street called the Northern Avenue is under construction, linking the Opera to Republic Square. These being the two focal points of life in the city will make for a lively street. Brand new buildings are shooting up all along the avenue in Armenia's first post-Soviet urban development of this magnitute.

Along with the Northern Avenue which is under construction, some of the hipper streets are Abovian Street, Tumanian Street, Sayat Nova Street, Terian Street, Mashtots Street, and Amiryan Street.

Yerevan is served by two principal airports: Erebuni Airport, which is east of Yerevan and almost unused, and Zvartnots International Airport (code EVN), 15 km west, which is used by nearly everyone arriving from abroad. Yerevan is lightly covered by a (so far) one-line metro system, the Metro, as well as by a large number of bus lines and a massive number of Yertughayin Taxis, the primary form of public transportation. This interconnects with the national train lines. The Yertughayin Taxi is a van which drives along numbered routes, which cover the entire city quite well. The city is the hub of Armenia's highway network. Traffic in Yerevan flows poorly, with corrupt police having a negative rather than positive impact on flows, and countless Yertughayin Taxis weaving dangerously and stopping suddenly in traffic.