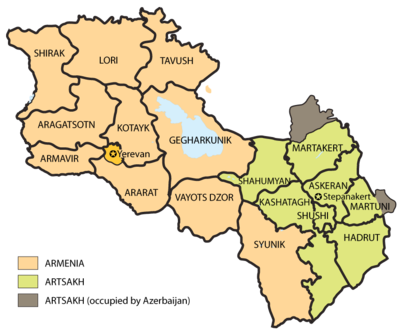 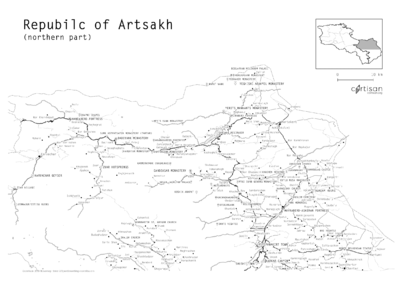 Artsakh is an area of little country which packs in a lot of natural beauty. Mountains, green rolling hills, valleys, canyons, rivers and woods. The people are very proud, and their dialect is very thick. Scars of the Karabakh war of independence that was fought in the early 1990s are still apparent in many places, though time and impressive rebuilding efforts have been changing that. The capital city of Stepanakert bears virtually no traces of the conflict after intensive reconstruction and even growth. Large donations from the Diaspora have helped build 2 new highways which connect Artsakh to Armenia - one from the north and one from the south. A third new highway has also been built as well, going from the very north of the republic (Mardakert) to the southernmost city (Hadrut). Many of the remaining interior roads are in very poor condition. It is perfectly safe to visit Artsakh and see the main sights. Staying away from the front lines and sticking to the paths most traveled is not difficult and will avert unnecessary risk. The best rule of thumb is not to venture east of the Martuni-Aghdam-Mardakert highway. The occasional damaged building or burnt out village is common in Artsakh, leftovers of the war that can be surreal for the average tourist, but only interest locals from a salvage/recycling perspective. Check visa requirements before any visit, as they are separate from Armenia's.