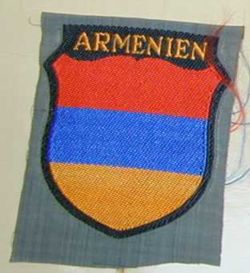 During World War II, Armenia was part of the Soviet Union as Armenian SSR. Over five hundred thousand Armenians fought for the Soviet army, and half of them fell in battles. Five Armenian infantry divisions were formed. Armenia gave 4 marshals and 60 generals. The Armenian Church and overseas Armenian donated large sums of money. After the war, the Armenian and Georgian Republics laid territorial claims to Turkey. However, the Soviet government was not willing to return the Armenian lands and shortly thereafter stated to have no claims to Turkey.

Some captured Armenians chose to fight for the Axis. They fought in the following units: