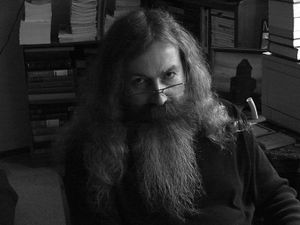 William Michaelian, (born May 20, 1956) is a novelist, short-story writer, and poet. Born in Dinuba, California, a small town southeast of Fresno, Michaelian grew up on his family's farm. He has lived in Salem, Oregon, since 1987. His stories, poems, and drawings have appeared in literary periodicals in the U.S. and Armenia; his work has been performed on Armenian National Radio. His stories and poems have appeared in Ararat (New York), a quarterly journal devoted to literary and historical work on Armenian subjects. He is also a contributor to the multi-lingual Armenian Poetry Project, curated and produced in New York by Lola Koundakjian. In 2003, he launched an open online literary dialogue, The Conversation Continues, with John Berbrich, publisher and editor of the small press literary quarterly, Barbaric Yawp (Russell, New York).

Michaelian's work has been compared by reviewers to that of Walt Whitman, James Thurber, Samuel Beckett, and Fyodor Dostoevsky. A keen, often wry analysis of contemporary human behavior, sympathy for the downtrodden, humor, satire, and a strong anti-war sentiment are hallmarks of his work. Much of his poetry and prose bears a lyrical, rhythmic quality; in many pieces, its visual appearance adds to this effect. Owing to their meticulous construction, unconventional word order, musical qualities, and newly coined terminology, certain of his poems are reminiscent of James Joyce's Ulysses and Finnegans Wake. Other influences include Richard Brautigan, Thomas Wolfe, Guy de Maupassant, and William Saroyan, the author's contemporary and grandmother's first cousin.