Difference between revisions of "Vazgen Sargsyan" 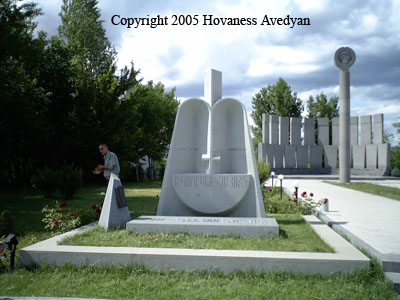 Vazgen Sargsyan (Armenian: Վազգեն Սարգսյան, March 5, 1959 in Ararat, Armenia – October 27 1999[1] in Yerevan, also written Vasgen Sarkisyan, Sarkissian or Sarkisyan) was Prime Minister of Armenia for the Republican Party of Armenia from June 11, 1999 to October 27, 1999 until his assassination in what is known as the Armenian parliament shooting. He was well-known as a military leader, the first Minister of Defense of Armenia, awarded by Artsakh hero and National Hero of Armenia (posthumously) titles. In 1992 he organized the "Mahapart"'s special battalion[2].

He graduated from Yerevan State Institute of Physical Education in 1979 before working as a physical instruction teacher in the Ararat village school. From 1983 to 1986 he was the Communist Youth League leader at the cement factory in Ararat.

An amateur writer, Sargsyan then moved into literary life. From 1986 to 1989 he was head of the publicity department of the Garun (Spring) literary monthly in Yerevan. But the Armenian national ferment of the late 1980s saw him abandon this role as he flung himself headlong into political life.

Sargsyan's rise to the top started when, as a former Communist Youth league organiser, he joined the growing movement for the mainly-Armenian enclave of Nagorno-Karabakh to be transferred from Azerbaijani to Armenian jurisdiction. He was elected to the Armenian parliament in the 1990 elections, the first semi-free elections Armenia had held, where he became a member of the Internal Affairs and Defence Committee. Between 1990 and 1992 he spent much time in Karabakh itself, commanding irregular troops in their fight against Soviet and Azerbaijani forces.

From 1992-1993 he was defence minister of Armenia, while from 1993-1995 he was state minister in charge of defence. In 1995, during the restructuring of government ministries, he once again became defence minister. In these various capacities he laid the groundwork for building Armenia's army, a cause dear to his heart. He controlled the fledgling armed forces during the height of the fighting in Karabakh, in which Armenia's forces were heavily involved,

He also controlled his own private army of Karabakh veterans, the Yerkrapah (Defenders of the Homeland). After the 1994 Karabakh ceasefire he unleashed them on people he disliked within Armenia, especially political opponents, human rights activists and members of religious minorities, who suffered brutal attacks in 1995 initiated by Sargsyan. He was also widely known to have used his position to personally steal money from both the government budgets he had access to, as well as to use his power in creating protected monopolistic business ventures, leading to a massive personal fortune.

Despite ensuring that President Ter-Petrosyan's side won the disputed 1995 election, and crushing street protests against the manipulated results, Sargsyan abandoned him in late 1997 when Ter-Petrosyan had apparently agreed to some unpopular concessions in negotiations with Azerbaijan over Karabakh, and switched his support to prime minister Robert Kocharyan, who soon took over as president.

After serving as defense minister, he was appointed prime minister by President Kocharyan. Sargsyan was killed, however, along with parliament speaker and former communist leader Karen Demirchyan and several other politicians when gunmen, headed by journalist Nairi Hunanyan took over the parliament building. Sargsyan appeared to be one of the main targets of the assasinations and attempted coup, as Hunanyan said "you have drank the blood of our people", an apparent reference to the massive corruption and building of a personal fortune as ordinary Armenians were suffering abject poverty. The surviving parliament members were held as hostages until the next day. A week later, Vazgen's brother, Aram Sargsyan became prime minister until May 2000.