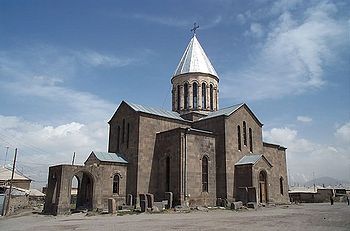 Vardenis (11465 p) till 1969 Basargechar, anciently Vasakashen, was settled in 1830 from Western Armenia. There are two hotels as well as Bronze Age tombs. Leaving the village on the E road (the 10 o'clock turn on the roundabout), there is on the left a large late 19th/early 20th c. Astvatsatsin church, built on earlier foundations. Surrounding the church are fine khachkars and tombstones of a 16th c. burial ground. (Source: Rediscovering Armenia Guidebook)