Difference between revisions of "Tigran Arzakantsyan" 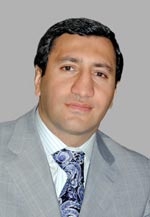 Mr. Arzakantsyan graduated from Kamo Veterinary College in 1984. He is a veteri­narian and an honorary Doctor of International Business.

Mr. Arzakantsyan is divorced and has three children.

MOSCOW, September 26 (RIA Novosti) - An Armenian member of parliament was seriously wounded early Wednesday after being shot in the casino of the Metropol hotel in central Moscow, a spokesman for the Armenian embassy said.

Tigran Arzankantsyan, 41, is currently undergoing an operation in a Moscow hospital.

The preliminary reports say the assault occurred following a quarrel between several people, one of whom opened fire.

None of the hotel guests were injured. The assailant and his accomplice fled the scene.

An investigation is underway and a criminal case has been opened.

The Armenian lawmaker and businessman arrived in Moscow on a private trip, which was unconnected with the latest visit by Armenian Prime Minister Serzh Sarkisyan to the Russian capital, the spokesman said.

On Tuesday Arzankantsyan met with Armenian students in Moscow as part of the country's governmental delegation to Russia.

The spokesman said the incident was not linked with Sarkisyan's meeting with his Russian counterpart on Tuesday for the first time since Viktor Zubkov's appointment.