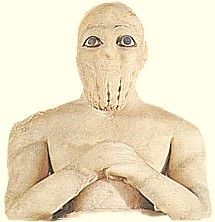 The Sumerians that were of Armenic or Armenid extraction had established one of the first centers of civilization in the lower part of Mesopotamia. Many scholars agree that Sumerians initially inhabited Armenian Highland and gradually descended to first Northern Mesopotamia and eventually spread further south, establishing the cities of Ur [excavated by Sir Leonard Wooley in the 1920s], Uruk and Eridu [note the sacred variations -- AR-UR-ER-OR prefix]. Fortunately a number of Sumerian inscriptions dating from somewhere between 2750 and 2500 BC have been preserved.

They give us a fascinating glimpse into the Sumerian origins and culture. In the great Epic of Gilgamesh, the Sumerians recount the land of their ancestors, the Arattans in the Highlands of Armenia. Most scholars agree that Aratta [Suburi - Sumerians also known as Suberians and called themselves Shinar[ar]s] was in fact the first Indo-European state that existed in the first half of the third millennium BC. Archaeology has revealed that in Metsamor, between 2,800-2,600 BC, astronomer scientist high priests observed the rising of Sirius, and worshiped it. Sirius [Dog Star] symbolically stood for Matron Goddess Aya-Inanna-Ninhursag [later Anahit] of Aratta. Enmerkar, the grandfather of the hero Gilgamesh lived around 2,750 BC and the King of Aratta through his herald sent a message to Enmerkar stating that Inanna had not abandoned neither Aratta nor her house therein -- the Ziggurat Temple that was a primordial astronomical observatory and an origin site of metal smelting foundries...

The historical record about the Armenian Highlands antedates the name Urartu by almost a thousand years and the first reference to the region as Armenia is reported to be the Sumerian inscription of Naram Suen in 2260 BC. Sumerian inscriptions of Naram-Suen dating to 2260 BC as the earliest mention of the name in a form recognizable as Armenian. These inscriptions refer to Sumerian battles with the Armani.[1]

The Sumerians, an ancient peoples and one of the first civilizations in the world called Ararat, Arrata. In their great epic poems of Gilgamesh and Arrata, they tell of the land of their ancestors, the Arratans in the Highlands of Armenia. The Sumerians also in the epic poems describe the Great Flood and the rebirth of life after the terrible deluge that fell from the Highlands of Armenia unto the lands of Mesopotamia and the Fertile Crescent. The Sumerians had a very close connection with the ancestral Land of Ararat and considered it as their ancestral homeland (many historians and archaeologists are convinced that the Sumerians initially lived in Northern Mesopotamia and Armenian Highland).