Difference between revisions of "Sergei Merkurov" 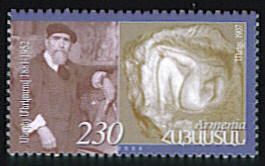 The statue of Lenin which stood in Republic Square during Soviet times was the work of Sergei Merkurov (1881-1952), a prominent Soviet sculptor.

Sergei Merkurov, people’s artist of the USSR, was born in the Armenian town of Alexandropol (now Leninakan) [Now Gyumri, a derivative of its original Armenian name, Gumayri]. He attended art college in Germany (1902-05) and then went on to study further in Paris under Auguste Rodin in 1909.

Merkurov had met Lenin when the leader was living abroad, and listened to several of his speeches after he returned to Soviet Russia. This personal acquaintance is doubtless the reason why the statue is so convincing and acts so strongly upon the emotions.