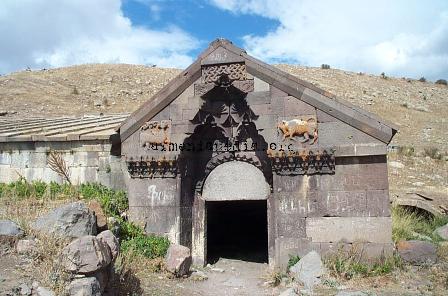 In medieval Armenia many buildings were built along commercial routes for the accommodation of travelers. One of those, the caravanserai of Selim (Սելիմ), was built in 1332 by Prince Chesar Orbelian, according to an inscription in Armenian and Arabic. This caravanserai offered hospitality to travelers along the highway crossing the Selim (Sulema) mountains. The best preserved of all medieval caravanserais in Armenia, it comprises a vaulted antechamber and a large hall partitioned into three sections lighted through openings in the ceiling. This building is an excellent example of Armenian secular architecture in the Middle Ages. [Paragraph Source: Monuments of Armenia]

Selim Caravansaray** lies below the road just before the summit on the south side of Selim Pass (2410 m), a splendid relic of the days when an international trade route connected Vayots Dzor to the Sevan basin and points North. According to the Armenian inscription on the right inside the door, Prince Chesar Orbelian and his brothers built this rest-house in 1332 in the reign of Abu Said Il Khan, "the ruler of the world," whose death in 1335 deprived the world of an enlightened Mongol despot and ushered in a new wave of invasions. The Persian inscription on the outside lintel (almost effaced by recent vandals) gives the date 1326‑7. The Armenian inscription reads:

"In the name of the Almighty and powerful God, in the year 1332, in the world-rule of Busaid Khan, I Chesar son of Prince of Princes Liparit and my mother Ana, grandson of Ivane, and my brothers, handsome as lions, the princes Burtel, Smbat and Elikom of the Orbelian nation, and my wife Khorishah daughter of Vardan [and ...] of the Senikarimans, built this spiritual house with our own funds for the salvation of our souls and those of our parents and brothers reposing in Christ, and of my living brothers and sons Sargis, Hovhannes the priest, Kurd and Vardan. We beseech you, passers-by, remember us in Christ. The beginning of the house {took place} in the high-priesthood of Esai, and the end, thanks to his prayers, in the year 1332.

The best preserved caravansaray in Armenia, Selim is built of basalt blocks, with a cavernous central hall for animals separated from the two vaulted side aisles by rows of stone mangers. Bring a flashlight (though the dim light through the smoke holes in the roof adds a proper medieval flavor). There is a little spring/fountain monument just uphill beyond the caravansaray. The road that leads up to the Caravanserai and thereafter to Martuni, has recently been repaved, and is an awesome drive in the springtime. (3 Paragraph Source: Rediscovering Armenia Guidebook) 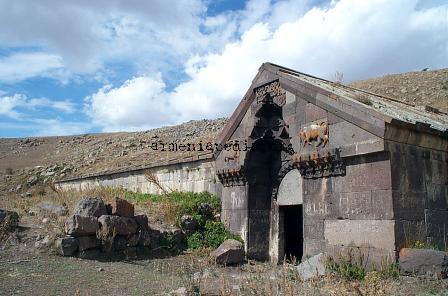 In old times many roads traversed Armenia, connecting different parts of the country and neighboring countries: they were of economic and military importance. To serve the roads caravanserais were built, unique architectural monuments of Medieval Armenia.

One of them is the caravanserai of Selim, situated in the Selim (Sulema) mountain pass, 2410 m above the sea level, on the old road that connected historical Gegharkunik with Vayots Dzor. According to the two building inscriptions (one of which is in Arabic) the caravanserai was built in 1332 by Prince Orbelyan Chesar.

The caravanserai, built of basaltic stone, stretches from east to west. It belongs to a type of caravanserai of Armenia with one hall and three aisles. To the eastern part of the quite large hall (13.0 x 26.0 m) a chapel was added (now half-destroyed).

The hall is divided into three naves by seven pairs of pillars. From the western side, at the end of the narrow aisles small rooms were built for the men that accompanied the caravan. The animals of the caravan settled in the hall's narrow aisles, where stone troughs were built for them between the pillars and in one of the corners of the hall there was a whole water-pool.

The roof of the three-aisle hall was realized by means of the three parallel vaults, that of the nave or central aisle taller and wider than those of the two lateral aisles. The vaults are supported by arches stretching from pillar to pillar (in the nave) and from the pillars to the walls (in the side aisles). Through three roofings of the roof some light falls into the hall and airs it too.

The only entrance (1.65 x 2.0 m) to the hall is from the adjacent vestibule, a rectangular room (5.35 x 9.0 m) covered with a roof leaning on three arches. On the east these arches rest on the window edges; on the west on the polyhedral pillars. The building inscription in Armenian was inscribed on the eastern wall, opposite the entrance leading to the wall. The different size and style bays covered with stalactites give the vestibule a richer look.

The only place covered with architectural decorations is the southern wall of the vestibule together with its entrance. The entrance is surmounted by a half-rounded lintel on which is the Arabic inscription. The entranceway itself is crowned with a stalactitic passage.

Over the stalactitic-decorated belts there are two high-reliefs: of a winged animal (to the left) and a bull (to the right).

Another smaller caravanserai is situated 12 km down from the caravanserai of Selim, at the southern foot of the mountain pass, near the village of Lernantsk (Aghdenk). It belongs to the type of single-nave caravanserais and is also built of basalt. The foundation date is unknown. A not very big hall (7.8 x 10.8 m) is covered with a cylindrical vault built on 6 supporting arches.

There are stone troughs inside. The only entrance is from Western side. This monument also is lit through the roof, a feature that, together with certain other details, witnesses to the influence of Armenian dwellings on the architecture of caravanserais.