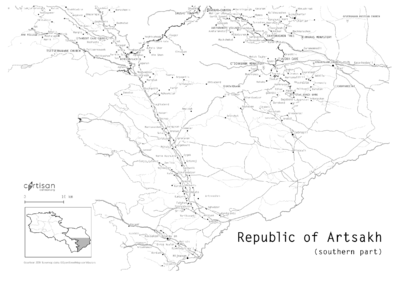 With the exception of Tsitsernavank Church and the city of Berdzor, which are on or off the highway linking Goris in Armenia to Shushi Region of Artsakh, Kashatagh Region is not covered in this book. Perhaps it will be covered in a future edition. Please see the book Armenian Cultural Monuments in the Region of Karabakh by Research on Armenian Architecture's Samvel Karapetyan for a thorough treatment of the region. You can download that book for free here: http://www.raa-am.com/raa/pdf_files/136.pdf

In any case, Kashatagh has a large number of mostly small villages with stunning nature. N of the highway the river valleys quickly transform into beautiful mountains and gorges. To the S of the highway the region flattens out, slowly losing elevation all the way until the border with Iran. This highway was completed in 1999, becoming the first proper direct link between Artsakh and Armenia, which had no direct connection during Soviet times - one of the complaints of local Armenians at the time. In 2017 a second highway connection was completed further N, connecting Vardenis in Armenia to the Martakert Region of Artsakh. Before the war, the region of Lachin was not a part of the region of Karabakh and was populated almost entirely by Azeris and Kurds, and in an interesting footnote of history was briefly labeled as “Red Kurdistan” during Soviet times.

Tsitsernavank Monastery and the city of Berdzor

On the road from Goris, heading towards Stepanakert, you see the mostly ruined village of Aghavno (55p, Աղանուս; Zabux) as you descend to the Aghavno River. A few meters after crossing the bridge over the river is the border checkpoint for entering Artsakh, but right before it is a road to the left, leading up the Aghavno river for 15km to the restored 5-6c Tsitsernavank Church ☆45 ⟪39.64438, 46.40793⟫. Named either for the nearby swallows or else for a piece of the little finger (tzitzern) of St. George the Dragon-Slayer which is supposed to have ended up at the monastery. The long, narrow, three-nave basilica is thought to date from as early as the 5c, with a small bell-tower added in late medieval times. The church and belltower were renovated in 1779, and again in 2001, when it was reconsecrated after a diaspora-funded renovation. There is now an annual festival of St George at the monastery.

Beyond the Aghavno River and the border checkpoint, the road winds up to Berdzor (2190p Բերձոր; Lachin in Az.), the biggest settlement in and capital of the region, which is considered of great strategic importance along the highway to Stepanakert. The capture of the town by Armenian forces on May 15, 1992 was one of the important turning points in the war, for the first time linking the Republic of Armenia with the Armenian fighters operating in Artsakh at the time, allowing reinforcements to be sent at a snail's pace over the at the time barely passable road. In 1998, a few years after the end of the Karabakh War, the new Holy Ascension Church ⟪39.632667, 46.5405⟫ was completed in traditional Armenian architectural style, perched at the edge of a promontory in the middle of Berdzor.

From Berdzor the road continues to wind its way into Artsakh's Shushi province and eventually the city of Shushi, followed by Stepanakert.