Difference between revisions of "Norayr Mnatsakanyan" 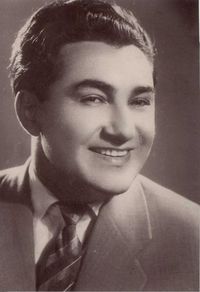 Norayr Mnatsakanyan was born on January 7, 1923 in an old Yerevan family. He inherited the love for traditional music from his parents. Possessing an ever singing spirit of a talented youth, Norayr Mnatsakanyan won his first prize at the "Sayat Nova" competition held in Moscow in 1936. Owing to his extraordinary vocal qualities and his passion for acting, Mnatsakanyan started his career as actor and singer at the Yerevan State Theater of Musical Comedy after Hakob Paronian. As surprising as it may seem, Mnatsakanyan played the first Gikor on the Armenian stage in the namesake performance based on Hovhannes Tumanian's famous novel. Mnatsakanyan's artistic talent and his reverence for the Theater drove him to work with such eminent theatrical stage directors as Armen Gulakian and the late Vardan Adjemian. Mnatsakanyan also had the honor of working with the "titans" of the Armenian theatrical arts at the Yerevan State Academic Theater after Gabriel Sundukyan: Vahram Papazian, Hrachya Nersisyan, Avet Avetisyan, Hambardzum Khachanyan, Babken Nersisyan, Metaksia Simonyan, the late Mher Mkrtchyan and Khoren Abrahamyan. Norayr Mnatsakanyan's acting, apart from his artistic talent, vouched for his unsurpassed mastery of world literature. After seeing Mnatsakanyan's performance in the role of the Shakespearean Othello, Vahram Papazian highly praised Norayr for his excellent rendition of Othello's protagonistic pathos and antagonistic callousness, and foresaw a bright future for him in acting. Mnatsakanyan later played one of the leading roles in A Man from Olympus (Chelovek iz Olimpa)(Armenfilm,1974).

Purporting to pursue a more worldly profession, Norayr Mnatsakanyan held a Master of Arts degree from the Department of Philology of the Yerevan State University. Upon his graduation, Mnatsakanyan defended a dissertation with a thesis on "Sayat Nova's Lyric Poetry in the Armenian Literary Milieux." Mnatsakanyan proceeded with a professional career as a journalist and a freelance writer. With his unconventional disposition, Norayr Mnatsakanyan has authored an anthology of short novels dedicated to the old city of Yerevan, depicting its people's way of life, its customs and traditions. As a journalist, Mnatsakanyan's articles and critiques on various issues of the Armenian arts and culture frequented the pages of many periodicals. One of Mnatsakanyan's most groundbreaking articles was dedicated to the famous Armenian duduk players of the past and the present: Margar Margarian, Levon Madoyan, Vatche Housepian, and Jivan Gasparian. Mnatsakanyan also hosted a special program in 1985, the heyday of his artistic career, on the Armenian State Television, which was about the instrumental and stylistic distinctions of the duduk and its most outstanding players.

In spite of his success in acting and his excellence in writing, Mnatsakanyan's innate predilection initially belonged to singing. Norayr's art of performance, his truly rich and mellow voice, as well as his unique professional approach had already made him long sought-for to Armenian music lovers both in Armenia and abroad. Tatoul Altunyan, one of the greatest contributors to Armenian traditional music, invited Norayr Mnatsakanyan to the State Philharmonic Chapel to perform as a soloist. Here, Mnatsakanyan had the pleasure of working with Araksia Gyulzadyan and Varduhi Khachatrian. Apart from his Sayat Nova repertoire, in this period, Norayr Mnatsakanyan performed traditional songs and ashough works by Sheram, Ashot, Jivani, Shahen, Havasi, as well as famous compilations of the urban folklore. However, the inviolable right of Norayr Mnatsakanyan's achievement consists in his performances of Sayat Nova's works. His performances of Sayat Nova imbued the Bard's poetry with unprecedented lyricism and spirituality. It is through Norayr Mnatsakanyan's rendition of Sayat Nova that the ethical and metaphysical peculiarities in the works become apparent. The singer grieves and rejoices with the poet, feeling every tremble of the great Bard's heart. It is Norayr Mnatsakanyan's unforgettable voice that brings us the songs of Sayat Nova in the namesake movie (1960). Mnatsakanyan's performances became a lot more accessible to the general public, when Aram Merangulian invited Norayr to perform as a soloist in his Ensemble of Folk Instruments of the Armenian National Radio and Television. Mnatsakanyan's songs are possible to find in several Soviet and post-Soviet Armenian films, including Sergei Parajanov's The Color of Pomegranates, also dedicated to the life of Sayat Nova (1968). Mnatsakanyan's unique rendition of the traditional Dle Yaman appears in the background of Andrew Goldberg's The Armenian Americans (2000). A number of documentaries were shot on Mnatsakanyan's life and activity intermitted by his own performances. Throughout his lifetime, the vocalist recorded over two hundred traditional and gousan songs, all of which are held like relics by the Museum Fund of the State Radio and Television of Armenia. His performances paved the way for many other successors in the traditional vocal genre.

Norayr Mnatsakanyan performed in twenty-four countries where Armenians had set foot and had established their communities. During his tour of the Middle Eastern countries, Norayr Mnatsakanyan received an honorary gold medal with the engraved image of Sayat Nova from King Hussein of Jordan after his concert in Amman (1979), which His Majesty attended with Queen Noor. Mnatsakanyan's performance of Sayat Nova brought him the highest honors at the Festival of Traditional Music in Lyons, France (1981). Subsequently, upon the request of the smaller Armenian communities in Luxembourg, Belgium, and the Netherlands, Mnatsakanyan performed in a tributary concert at the Conservatoire de Luxembourg Hall (1981). In the annual ceremony of the Armenian Music Awards, held in Los Angeles for the year 1999, Mnatsakanyan posthumously received a lifetime achievement award for his worthwhile contributions, and his album of traditional and gousan compilations, named Husher (Reminiscences) (Parseghian Records, 1999) was recognized as the year's best traditional album. Norayr is not with us anymore, but with us remain his art of performance, his "velvet" voice, and his legendary memory. The fascinating phenomenon is his legacy. Even after these many years, his songs have remained in the hearts and the mentality of those who still truly cherish genuine Armenian traditional music.