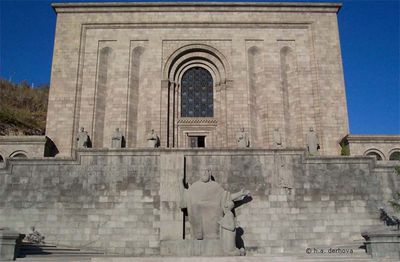 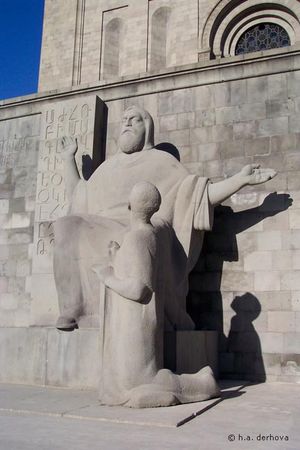 Armenia's state repository of ancient manuscripts, inluding illuminated manuscripts. The Institute of Ancient Manuscripts (the Matenadaran), built in 1957, was designed by Mark Grigoryan. Hardly a visitor leaves Yerevan without visiting the institute; it is one of the most interesting things to see in the republic.

A flight of steps leads up to a statue of Mesrop Mashtots, who compiled the Armenian alphabet (in 396). The scholar is seated with one arm raised aloft, pointing the way to literacy and knowledge to his first pupil, bending his knee reverentially before his teacher. The letters of the Armenian alphabet have been carved into the wall behind.

As you enter this temple of reason through massive doors of embossed copper, you see before you the entrance hail decorated with a mosaic of the Avarair Battle, one of the memorable events in the life of the Armenian people, when they rose, on May 26,451, against their conquerors. On the wall opposite the staircase there is a fresco, a triptych depicting three different periods in the history and culture of the Armenian people, by Ovanes Khachatryan.

The Matenadaran, which in ancient Armenian means ‘‘manuscript store’’ or ‘‘library’’, is a major centre for the study and preservation of Armenian works of literature. In ancient times and the Middle Ages manuscripts were reverentially guarded in Armenia, and they played an important role in the people’s fight against spiritual subjugation and assimilation. The major monasteries and universities had special writing rooms, where skilled scribes copied books by Armenian scholars and writers, and Armenian translations of works by foreign authors.

The scribes’ lot was not an easy one: for tens of years they would sit in tiny, dark rooms, hunched over manuscripts. It is difficult to say how many of them lost their sight, and how many of them found an early grave because of their job; how much indeed they suffered, these humble people, saving books from fire and pillage, how many of them were killed there in their cells as they sat working. Many manuscripts, like wounded soldiers, bear the marks of sword, blood and fire. The enemy buried them, drowned them and even went so far as to chain them up.

Those selfless scribes, thanks to whom many of the treasures now in the Matenadaran have come down to us, thought not of themselves; they were concerned only for their manuscripts. Here is a touching inscription, appended to the end of a book by a book-lover of olden days:

Reader mine, I beg of thee
Drink in my words:
Take my book unto thyself, keep it and read it.
If it be captured, retrieve it,
Place it not in damp places, for it will moulder,

Nor let the wax of your candle drip upon it,
Neither moisten your finger to turn the pages,
Nor in shameful fashion tear out its pages.

Tens of thousands of Armenian manuscripts perished in the innumerable invasions, wars and plundering raids. Approximately 25,000 have survived, including over 10,000 folios and also 2,500 fragments collected in the Matenadaran. The rest of them are the property of various museums and libraries throughout the world, chiefly in Venice, Jerusalem, Vienna, Beirut, Paris, the Getty Museum in Los Angeles and London.

The Matenadaran’s “holy of holies” are the armoured cellars, equipped to protect the manuscripts from dust and damage.

Visitors to the Matenadaran, and there are more than 50,000 annually (1982 figure), can see the best examples of manuscript books and the wonderful illustrations to them in the exhibition hall on the first floor. There are works on history, philosophy, mathematics, medicine, astronomy and geography. On a separate stand is the largest Armenian manuscript in the world, weighing 34 kilograms. 700 calf skins were used in its compilation. Next to this giant is a tiny book measuring 3 x 4 centimetres and weighing a mere 19 grams. Other interesting exhibits include the Gospels of 1053, 1193 and 1411 with the unfading colours of their masterful miniatures, translations from Aristotle, a unique ancient Assyrian manuscript and an ancient Indian manuscript on palm leaves in the shape of a fan.

The Matenadaran’s manuscript collection is of prime importance for the study of the history and culture of Armenia, and also alt Transcaucasia, Asia Minor and many Middle Eastern countries. Works by some philosophers of antiquity survived only in their Armenian translation. These include Eusebius of Gaesaria’s “Chronicle”, the ancient Greek philosopher Xenon’s treatise "On Nature" and many others.

The archives here are also rich, preserving over 100,000 documents of the fourteenth to nineteenth centuries: various deeds, decrees, treaties and letters, which contain vast material on the political and socio-economic history of Armenia and neighbouring countries.

Other relics in the exhibition include the first Armenian printed book “Parzatumar” (Explanatory Calendar), published in 1512 in Venice and the first Armenian magazine “Azdardr” (the messenger) first published in 1794 in the Indian city of Madras. Next to them are the Decree on the founding of Novo-Nakhichevan (a settlement near Rostov-on-Don, now included within the city boundaries), signed by the Russian Empress Catherine II, and Napoleon Bonaparte’s signature. In 1978 the writer Marietta Shaginyan presented the Matenadaran with a previously unknown document bearing the signature of Goethe.

The Matenadaran is constantly acquiring manuscripts found in other countries. Several hundred books dating from the thirteenth to eighteenth centuries have recently been sent by Armenians living in Libya, Syria, France, Bulgaria, Romania, India and the USA.

These precious items do not lie unused in the Matenadaran: by carefully studying the manuscripts, many of which are restored in a special laboratory, scholars in various fields can shed more light on many aspects of the history and culture of Armenia, the Caucasus as a whole as well as the Middle East. Experts in Armenia and Eastern studies come from all over the world, and all facilities are provided for their research.

Yet one more manuscript is carefully preserved here. Unlike all the others, however, its pages have been filled in our time. This is the visitor’s book, which contains comments by prominent scientists, major political and public figures, writers, artists and actors. This is the remark left in the book by Leonid Brezhnev, General Secretary of the Central Committee of the Communist Party of the Soviet Union, Chairman of the Presidium of the Supreme Soviet of the USSR, when he visited the Matenadaran on November 28, 1970:

"It is with profound admiration that I note the care with which Socialist Armenia preserves the magnificent relics of its people’s ancient culture for present and future generations." 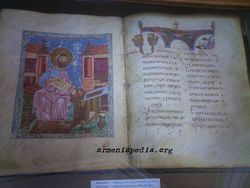 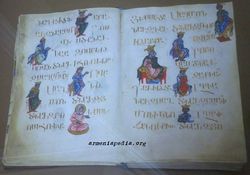 GROUNDBREAKING CEREMONY FOR A NEW BUILDING OF MATENADARAN

President Serzh Sargsyan today attended the groundbreaking ceremony of the new building of the Matenadaran. Supreme Patriarch and Catholicos of All Armenians, His Holiness Garegin II, Armenian benefactor Sergey Hambartsumyan, the Director of Matenadaran Hrachya Tamrazyan, chief architect of the new building Arthur Meschyan and the Mayor of Yerevan, Gagik Beglaryan, were also present at the ceremony.

Attaching importance to the fact that the groundbreaking ceremony of the new building of the scientific research center takes place on the 50th anniversary of its establishment, the Director of Matenadaran, Hrachya Tamrazyan said: "This was not a coincidence, but a natural phenomenon.

It is a proof of our people's creativity and wisdom."

The Matenadaran, officially called the Mesrop Mashtots Institute of Ancient Manuscripts, was founded in 1959 to house and maintain one of the world’s richest collections of handwritten books spanning a broad range of subjects, including history, philosophy, medicine and literature. It currently has 17,000 mainly Armenian-language manuscripts and 30,000 other documents of interest to scholars.

A fraction of those manuscripts dating back to medieval times is put on display at a museum operating within the old Matenadaran building which is perched on a hillside overlooking downtown Yerevan.

The Armenian government initiated in early 2008 the $14 million construction of a new building adjacent to the existing one. It will now house the manuscript repository itself as well as other facilities of the institute employing hundreds of people.

The project was financed by Russian-Armenian businessman Sergei Hambardzumian and Maxim Hakobian, a major shareholder in Armenia’s largest mining company. They donated $10 million and $4 million respectively.

Sarkisian paid tribute to both businessmen as well as Artur Meschian, a prominent Armenian musician and architect who designed the building, in a speech at the inauguration ceremony.

Catholicos Garegin II, the supreme head of the Armenian Apostolic Church, and Catholicos Aram I, the number two figure in the church hierarchy, then consecrated the building in a joint prayer service. The new structure is equipped with a high-tech laboratory to preserve, restore and digitize manuscripts.

“This is one of the most important events taking place within the framework of the celebrations of the republic’s 20th anniversary,” Hrachya Tamrazian, the Matenadaran director, told RFE/RL’s Armenian service (Azatutyun.am). He said it is “opening up huge possibilities for internationalizing Matenadaran’s scientific activities.”

Tamrazian also emphasized the fact that the reconstruction will lead to a major expansion of the manuscript museum. The Matenadaran’s entire old building, constructed in 1957, will be used for permanent exhibitions, he said.

“It will become one of the world’s unique museums,” added Tamrazian.

Armenia's manuscripts museum and institute, Matenadaran, has completed a year-long renovation of its main facility. President Serzh Sargsyan attended ceremonies marking the completion of the popular tourist site, which opened in 1959.

The new premise, adjacent to the main building, is 3 times bigger that the main one, which was build as a depository of one of the he world's richest collections of handwritten books related to history, philosophy, medicine and literature. The new section houses some 18,000 books and 30,000 documents.

Also, the Virtual Matenadaran exhibition is planned to open, as well as various educational programs.

The main premise of Matenadaran, officially called the Mesrop Mashtots Institute of Ancient Manuscripts, will now serve as museum.