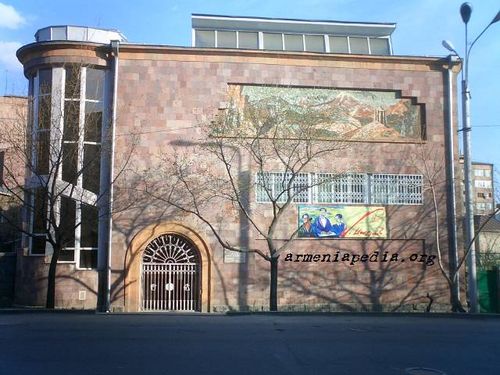 Moskovyan Street becomes Saryan Street, so named after Martiros Saryan (1880-1972) and here too stands Martiros Saryan House-Museum — a memorial to the artist, at No. 3. A building containing an exhibition of Saryan's pictures is attached to the small residence with its workshop.

Martiros Saryan studied in the Moscow School of Painting, Sculpture and Architecture. He was greatly influenced by Russian art, especially by such painters as Valentin Serov and Konstantin Korovin. Even Saryan's first canvases show his penchant for bright colours, his original vision of the world around him, expressiveness and unusual composition. His cycle of works painted after trips to Turkey, Iran and Egypt first brought him renown. In 1921, Saryan settled in Yerevan, and from then on Armenia, its countryside and people, became the main theme in his work. He is particularly famous for his landscapes, including the astonishing "Saryan's Armenia", in which he celebrates the beauty of his land renewed. He also painted a fair number of portraits, which are remarkable for their psychological depth and philosophical approach. Saryan was also productive as a book illustrator and stage designer. Exhibitions of his works have often been held in Moscow, Leningrad, Rostov, Tbilisi, Baku, and in dozens of countries abroad. Martins Saryan was awarded the title of People’s Artist of the USSR, he was member of the USSR Academy of Arts, member of the Armenian Academy of Sciences, winner of the Lenin and State Prizes of the USSR and was made Hero of Socialist Labour. He is buried at the Komitas Pantheon in Yerevan.