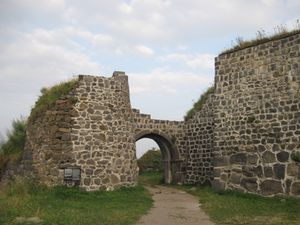 In the western settlement of Lori-Berd near Stepanavan, Armenia, surrounded with wonderful mountain landscapes is found the ruins of one of feudal Armenia's capitals - Lori-Berd.

The investigations of extensive remains in the territory of the town showed that the choice of the place for foundation and the dislocation of its compound parts were made like the capital of the Bagratid's kingdom- Ani.

The town stretched on a mountain plateau of almost triangle shape, bordered by deep ravines of Miskhan and Dzoraget rivers.

On this naturally inaccessible cape was situated the town- shahastan and the uptown, the suburbs were situated on mountain plateaus of Amrakits and Kendagegh, seperated from the town by the above mentioned ravines.

The links between them were established by the bridge- roads crossing over Dzoraget and Mooshkana rivers (from the first one the foundations are preserved on the left bank, the second one is completely preserved and was restored recently.

The uptown was situated in the pointed part of the cape and occupied a territory of 9 ha. It was reliably protected by the strong defensive which was rather tall, averaging 21.4m high, stretching from one ravine to another and fastened more than once (in some places its width came up to 20m). The vaulted gates of uptown were situated in the east-west wall along which, from the outside there had been a ditch which filled up with water through the underground channel. For protective purposes a secret water passage (jri tzampa - road of water) was also used. While coming down from the east-west edge of the uptown to the ravines of Miskhana river, in the final part it went through a steep tunnel and entered a round tower erected around the spring welling out from here.

Ruins of various buildings including two bath- houses are preserved in the territory of uptown. Shahastan with 25 ha territory stretched between the defensive walls of the uptown and the urban wall, which stood 700m from the latter (signs of it preserved).

Besides the two main defensive walls mentioned above, there were in surrounding ravines, primarily along the Miskhan river, in some places accessible to enemy, some extra fortifications walls.

Like Ani and other towns of medieval Armenia, the described defensive complex had a main purpose- to safeguard the town. The town of Lori-Berd excelled in its defensive fortifications and was famed for being inaccessible.

At the high price of many serious losses, the hordes of Seljuk Emir Kizil managed to capture the town in 1105. During the government of Georgian king David the Builder, Lori became the part of Georgia, starting the eastern clan of Georgian royal Orbeli family. During the Georgian king Georgi the III and his daughter-princess Tamara's power- for having rendered great services to the court- Lori was transferred to the property of Armenian prince Sarkis Zakaryan, then it was inherited by his son-amirspasalar Zakar Zakaryan.

During Zakarid reign building was done: the defensive walls were fastened bridges and other buildings were constructed.

The great importance of the town during this time is evidenced by the convocation of all Armenian churches in Lori, in which took part such outstanding personalities of Armenian Church as were Mkhitar Gosh, Khachatur Torontetsi, Hovanes Sanahitsi and others.

The later history of the fortress-town was tragic. The hordes of Khoremsk's shah Jalal-Edin in 1228 laid siege to the fortress, and capturing the suburbs by force, destroyed much, however he couldn't break the resistance of the town itself. When Lori was in the hands of the son of Zakari-Shahnshah, in 1238 the town was laid to siege again this time by hordes of Mongol khan Jagat. As they captured the town they exposed it to merciless destruction.

Later on throughout almost 200 years Lori was transferred from one hand to another, including to the representatives of Georgian prince kin Orbeli.

In 1430 foreign conquerors again captured the town, but soon had to return it to the former owners. During the coming ages the townspeople left Lori-Berd. The last of the populace, because of difficulties with water-supply and other discomforts, during 1925-1931 moved west of the fortress building the present town of Lori in it's new place.

In the territory of the town and outside of it during 1966-67 and 1969-1973 archeological excavations were made, which discovered interesting material from the Bronze and Early Iron Ages as well as medieval times.

Continue to the village of Lori Berd (303 v.). There a road angles right through the village, ending at the spectacular fortress of Lori** ("Lori Berd"). This was the capital of David Anhoghin (989-1049) of the Tashir-Dzoraget Kingdom, and was a feudal center of the Kyurikian family. It was taken over by the Orbelian lords of Georgia in the early 12th c, then came under the sway of the Zakarian brothers Ivane and Zakare. When the Mongols arrived, Lori Berd was the capital of Shahnshah, Zakare's son. Kirakos Gandzaketsi described its fall (Tr. R. Bedrosian:)

Chaghatai, the commander of all the detachments of the pagans, heard about the fortification of the city of Lorhe and about the abundance of treasures in it, for located there were the home of prince Shahnshah and his treasury. [Chaghatai] took with him select weapons and many siege machines, and in full readiness he went and settled in around [Lorhe], besieging the city.

Prince Shahnshah took his wife and children, secretly went into the valley there and secured them in a cave. He gave superintendence of the city to his father-in-law['s sons] but because they were weaklings, they spent their time eating and drinking and getting drunk, trusting in the strength of the city walls, and not in God.

The enemy arrived. They dug at the base of the walls and made them collapse, then settled around them and kept watch so that no one would flee. Now once the inhabitants of the city saw that [the Mongols] had taken the city, they began to crowd with fear and filled up the valley. When the enemy saw that, they started to enter the city and indiscriminately cut down men, women, and children taking their goods and belongings as booty. They discovered the treasures of prince Shahnshah which he had extorted and robbed from those he subdued. [He had] constructed there a sturdy treasury which no one could see, since the mouth of the pit was so narrow that treasures could be cast in, but nothing could be removed. They killed Shahnshah's father-in-law['s sons] and they did reconnaissance around all the fortresses in the district taking many both by threats and by treachery. For the Lord gave them into their hands.

Surrounded E, S, and W by the sheer gorges of the Dzoraget and Urut rivers, the N side of the promontory is protected by a massive stone wall with multiple towers. Preserved inside the fortress are two baths, the one on the W edge with complex clay piping inside the masonry. A rectangular roofed structure incorporating various medieval tombstones and Christianized by a couple of flanking khachkars, has no E apse but rather a shallow niche in the S wall facing Mecca, a reminder of Muslim occupation of the fortress till the 18th c. Lori Berd is attested as being inhabited under the Russians, but few traces are left of its recent history. A medieval bridge over the Urut is reached by a steep and winding boulder-cobbled path from the gate, but only one pier base is left of a second bridge over the Dzoraget. (Source: Rediscovering Armenia Guidebook.)