Difference between revisions of "Kobayr Monastery" 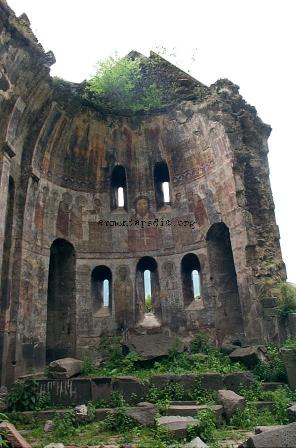 Just N of the modern industrial town of Tumanian (1389 v.), on the W side of the main Alaverdi road, almost invisible in the trees, is the tiny hamlet of Kober. About 80 m before the elevated little train station, a little paved spur leads up beside the railroad tracks. Crossing them, a flight of steps leads up and back, finally climbing up steeply up the side of the gorge. The reward for the strenuous (and sometimes muddy) 10-minute scramble is one of the most beautiful places in Armenia, Kobayr Monastery. Perched on a shelf of the gorge, in an ancient and sacred place where springs seep out of the rock, trees and vines twine among the intricately carved blocks of the monastery. The Katoghike church at the S end, partly fallen into the gorge, was built in 1171 by two Kyurikian princesses, but became a property of the Georgian Orthodox Zakarian family soon after. Shahnshah Zakarian is buried here. Most of the beautifully carved inscriptions are in Georgian, as is the manner of the splendid (albeit restored) fresco decoration in the churches. The bell-tower/mausoleum in the middle of the complex was built in 1279 to house the tombs of Mkhargryel and his wife Vaneni. Note the little sacred spring flowing within. On the ledge above is the refectory building. (Paragraph Source: Rediscovering Armenia Guidebook.)

Note: Be sure to climb up above the first level of ruins to see it from above, to see the second layer of ruins, and to get a closer view of the large cave. Also, park near the railroad tracks, since going under the low bridge leads to a very steep and short road, difficult to turn around on. Walking the whole way is just easier. Busses to Alaverdi pass Kober, but catching the next one may take a little time.

The Kobayr cloister belongs to a number of remarkable architectural complexes of medieval times, the history of which is closely connected with activities of famous medieval Armenian feudal houses- Kyurikid's, Bagratid's and Armenian representatives of Georgian religion from Zakharid's kin (Shahnshah, Georgi, Mkhagrdze) and others. It was one of the most important seats of written language and cultural centers of Armenia.

The name of the monument is connected with the word ayr-cave (Georgian- kob).

In the middle of XIII c Kobayr already passed from Kyurikids to Zakharids turning from a monotheistic center into a Chalcedonian one (confessed by Georgians).

This explains the presence of Georgian inscriptions on some parts of the monument, and also the decoration elements that have some similarities with Georgian style.

The cloister is situated in the southwestern part of Kober railway station road (Lori region, near the town of Tumanyan) on the high slopes of Debet ravine. Uncommonly harmonic combinations of the monuments of the complex with surrounding picturesque nature make the panorama of the cloister exceptionally impressive.

The essential part of the monuments consists of three churches, belfry-burial vaults, refectory, chapels, khachkars, and remainders of walls of the fortress.

There are some difficult to access caves and shelters among the rocks surrounding the territory of the cloister, the most notable of which is the sanctuary of Sghnakh. 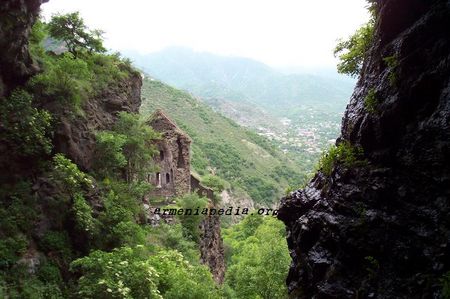 The big church (end of XII c) is a stretched lengthwise one-nave hall, which is in half-destroyed condition: the apse, the northern and western walls, and two bottom rows of layers of southern wall survive. A half-cylindrical canopy fastened by arches covered the church. Two entries from northern and eastern sides were set in rich casing. The apse was lightened by five windows put in two rows. The facades of the building were crowned in tall concave cornices, covered with ornamental details, ornaments and rosettes crosses standing almost as high as the walls, pediment from ornamental interlacing going up. From outside the walls were built of clearly trimmed basalt and from inside they were plastered and covered with frescos. The remainders of frescos, made very skillfully and delicately, preserved in the apse and on the northern wall altar (attached in 1971). The paintings of the apse make three rows. In the top row the Virgin Mary with archangels were pictured, in the middle- the sin of Eucharist, in the bottom- figures of saints and between the rows ornamental belt. On the altar walls the figures of prophets were pictured, and the most well preserved one was the figure of prophet EIliyah on the northern altar. Later on, on the north side of the basilica a square chapel- covered with vaulted side-chapels was built. The western entry was adorned with casing of intricate carving.

An opening connecting the chapel with the altar of the big church was opened in the southern wall. The chapel too was plastered and painted from inside. The frescos had the same compositional three-rowed scheme as in the big church. The difference is that here instead of the Virgin Mary, the sin of Deisus is pictured. From the north side of the church probably at the same time as the chapel's tunnel was built from which the pilasters of three corners and the bases of two intermediate pillars of northern side are preserved. From the north the tunnel had three-arched and from the west one-arched bays.

The half-cylindrical arch in the corners traversed with the arches of fewer saliences. To the east from the big church, on the edge of a rock, the half-destroyed church of Mariamashen with one-nave arch halls is preserved. The western entrance was bordered by semicircular archaic brackets, different from each other with simple profiles.

According to the inscription on the bulkhead of the entrance, the daughter of the king KYURIK II- Mariam built the church in 1171. A chapel was added to the southern wall of the church.

The belfry burial-vault was situated on the western part of the big church with some eminence. It appeared to be a square hall, closing in the eastern side with an apse the whole length of the wall. 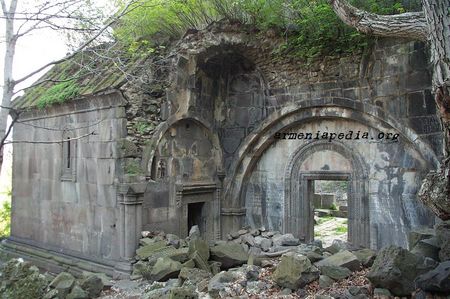 The southern entry was set in three-rowed stalactite casing. The floor was a half-cylindrical vault, fastened by arches, leaning on the brackets of traversal walls. The construction was crowned with an eight-pillared belfry- from that is preserved only a row from the foundation and three bases of pillars. According to the Georgian inscription on the southern wall, amirspasalar's son Shahnshah Mkhargredzeli and his wife Vanen built it in 1279.

The refectory (XIII c) rises in the northwestern side from the big church, not far from the belfry burial-vault. The rectangle hall has a size of 13,5 x8, 5m. Only the walls with the bottom row of half-cylindrical vault laying preserved. Arches, leaning on pilasters fastened the vault. Vaulted bays lengthwise also connected the pilasters with each other. From the southern arch of the western wall a rectangle by of 2 m wide opened.

The refectory's entry from the western side was built without any decorations.

A one-nave vaulted church with a tunnel was situated to the west from the main complex (XIII c).

In the eastern part there is a deviated from longitudinal axis deep semicircular apse, to which from the west joined the side-chapel with a half-cylindrical vaulted floor.

The only entrance opened from south, the bulkhead was bordered with a two-row stalactite horse-shoe-shaped belt. The tunnel occupied the middle part of the southern facade. From the eastern and southern sides it has two vaulted openings.

The cloister was surrounded with a serf (fortress) wall, the remainders of which 4-5 m high are preserved in the northern and northeastern parts of the territory of the complex. The main entrance was a tunnel-like vaulted opening with half-cylindrical towers.