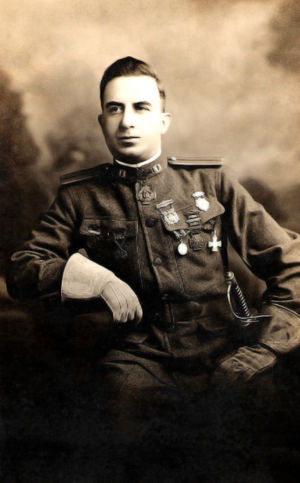 Captain James "Jim" Chankalian was born Bedros Chankalian (Armenian: Պետրոս Չանքալյան) in Dikranagerd Western Armenia. At a young age, he emigrated to the United States with his family. He graduated from an American high school, then entered a military academy to become an officer in the U.S. Army. In 1898, he participated in the Spanish-American War. He was honored for his bravery and became a captain in the U.S. Army.

The activity of the Armenian political parties had undoubtedly reverberated in the American-Armenian community from the standpoint of the national liberation movement. Moreover, the popularity of the Reformed Hunchak Party, without a doubt, had aroused Chankalian’s interest and motivated him to join that organization.

Already a seasoned soldier in the U.S. Army, Chankalian also became a well-known figure in the Armenian community of New York. After resigning from his rank of captain, he was offered an important position with Powers Co. He ably performed the job he had taken, which ensured him a comfortable living.

In 1915, the Reformed Hunchak Party, in cooperation with the [[Regional Committee of the Constitutional Democratic [Ramgavar] Party of the United States]], decided to send Jim Chankalian on a special mission, first to the Caucasus and then to Van. Chankalian gladly accepted the proposition, giving up his high position and comfortable station in life.

Taking with him a group of experienced volunteers, who had come from Western Armenia, he reached Van at the designated time and was greeted there by the brave leader of the successful heroic self-defense, Armenag Yegarian. After consulting with Yegarian, Chankalian put his extensive military experience in the service of the heroic struggle of the Armenians of Van and became Yegarian’s advisor and immediate co-worker in the formation of the Yerkrapah [Defenders of the (Father) Land] Regiment.

With the satisfaction of having fulfilled his obligation, Chankalian set out for the Caucasus, where he had intended to join General Antranig’s forces. In 1917, Chankalian returned to the United States, having fully performed the mission entrusted to him. But he had barely become situated, when he found out about the plan of the formation of the Armenian Legion. Owing to special arrangements made by the French government and army, it was projected that this legion should depart for the Palestinian front, to fight alongside the Allies (France, England and Russia) against the German and Turkish troops that were allied on the other side.

Chankalian, who enjoyed the unreserved respect and esteem of the American-Armenian community and Armenian political parties, was appointed leader of the detachment consisting of American-Armenian volunteers, which was to join the Armenian Legion.

The natives of Musa Dagh, who had found refuge in the seaside town of Port Said, Egypt, formed the nucleus of the Armenian, or Foreign Legion.

On July 9, 1917, Chankalian, along with the volunteers under his charge, boarded a French ship headed for Marseilles. From there, he went to Port Said and joined the nucleus of the legion; all together, they departed for Cyprus, where volunteers from all parts of the world wishing to join the Foreign Legion were assembled for training.The trained detachments were divided into three companies, or battalions.

By order of General Allenby, the commander of the combined troops of the Allied powers operating on the Middle Eastern front, the Armenian volunteers were transported to Palestine on September 14, 1918, where five days later they went on the attack against the German and Turkish forces in Arara.

The first line of the front, from the Mediterranean to the Jordan River, headed by Chankalian, was occupied by the detachments comprising the American-Armenian volunteers; with a minimum loss of life, they achieved the glorious victory at Arara.

World War I ended in November 1918. The Armenian volunteers were transferred from the Palestinian front to Beirut. From there, British ships took them, in groups, via Alexandretta (Iskenderun) to the mountains and plains of Cilicia. The legionnaires were greeted in Adana with Armenian tricolor flags. The Turks already appeared to be disillusioned.

In the overall prevailing atmosphere, it seemed an easy task to the fighters of the Armenian Legion to take all of Cilicia under their control. The execution of the plan to have an autonomous or independent Armenian Cilicia was undertaken with (Mihran) Damadian’s leadership. In order to crown such a plan as this with success, it was necessary to have a solid fighting force which could become a reality, with the assemblage of such battle-tested heroes as Chankalian, Antranig, Yegarian, (Yesayi) Yaghoubian, etc. However, the Allied powers had a different intention. They resorted to various measures, in order to prevent the entrance of Antranig, Yegarian, and the others into Cilicia.

Convinced that the plan of having an Armenian state in Cilicia would remain unattainable, a disappointed Chankalian returned to the United States, but not before having recorded brilliant pages in the history of the Armenian liberation struggle and World War I. Subsequently, as one of the leading figures of the Democratic Liberal Party in America, Chankalian traveled to all the cities with large Armenian concentrations, especially those in California, in order to organize efforts to raise funds in support of the first Republic of Armenia.

In order to give a greater impetus to his efforts on behalf of the homeland, Chankalian became the driving force behind the formation of the American-Armenian National Council and served as its president. He also became the first president of the Central Committee of the AGBU of America, and he devoted his time and service to the Armenian Church as well. This great patriot, endowed with exceptional military prowess, passed away in New York in 1947 at an advanced age, leaving behind him a great and unforgettable legacy of sacrifice made for his nation.