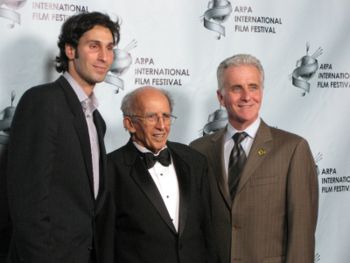 Dr. Hagopian in center of photo

Born in Kharpert-Mezreh in Historic Armenia, Hagopian has explored his roots and the history of his people through the medium of film and won critical acclaim, including two Emmys for the writing and production of The Forgotten Genocide, the first full-length feature on the Armenian Genocide. In all, Hagopian’s work encompasses nearly 400 “witness” interviews and twenty years of research.

In 1979, Hagopian founded the non-profit Armenian Film Foundation to document Armenian culture and instill pride in Armenian youth worldwide. Since then, he has been leading the effort to raise funds and create the “Witnesses” trilogy on the Armenian Genocide. The first film, Voices From the Lake, provided a case study of the Genocide’s impact on one community, Hagopian’s birthplace of Kharpert-Mezreh.

Hagopian holds a doctorate in international relations from Harvard University and an undergraduate degree from University of California, Berkeley. Having left Armenia as an infant, he grew up in Fresno, California, before moving to Los Angeles as a teenager.

An article in the Los Angeles Daily News on 4/23/2014 titled: Armenian Genocide commemoration, awareness a cross-generational affair, by Adam Poulisse, says the following: