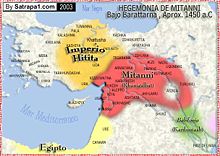 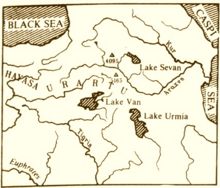 In the 33rd year of his reign, while he was in the Armenian Highlands in 1446 BC, Thutmose III of Egypt, referred to the people of Ermenen (Armenians), and says in their land "heaven rests upon its four pillars". Under the reign of Tuthmosis IV, friendly relations were established between the Egyptians and the Mitanni. The daughter of King Artatama was married to Tuthmosis IV. The constellation of Hayk (Orion) in the Egyptian pantheon represented Osiris, and he was the Destiny of Pharaonic Ka after [Ba or Mer -- Ban in Armenian is anonymous with divine Ēut'iwn -- the royal insignia of Mitanni represented the official religion of the state -- the Orion-Aryan sun cult -- as a winged sun disk -- surrounded on both the Right and Left by a pair of eagles and lions -- symbolic of the solar power/energy. The Sun/Son Orion (Christ) rising from the East (Orient)... Akhenaten instated the Mitanni Aryan [Orion] solar cult as the official monotheistic [ONE God] religion of Egypt. The Armenian Orion Cult based in and around the sacred Mitanni city of Urhai [Ourhai or Ori-On] was the sacred religion guarded by the high priest Egyptian kings [going back to ages of recorded history]. This symbolism was also adopted by the Egyptian pharaohs [hence the winged sun disk and the Ba bird [connected with Ban] as the symbol of the immortal Soul that flew to the astral heaven -- represented by the hawk/eagle headed Hor[us] Arev the eventful journey to the Invisible Sun (Ararich/Creator/Source of Life).