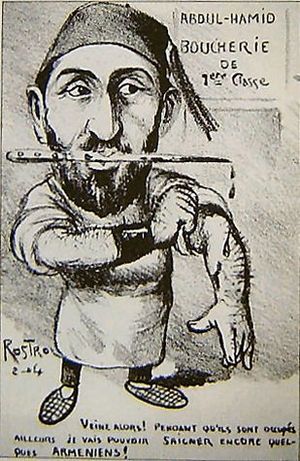 Contemporary political cartoon portraying Hamid as a butcher of the Armenians

During the long reign of Sultan Hamid, unrest and rebellion occurred in many areas of the Ottoman Empire. One of the most serious of these incidents occurred in some Armenian populated parts of Anatolia. Although the Ottomans had crushed other revolts in the past, the harshest measures were directed against the Armenian community. They observed no distinction between the nationalist dissidents and the Armenian population at large, and massacred them with brutal force.[1] However, this occurred in the 1890s, at a time when the telegraph could spread news around the world and when the Christian European powers were vastly more powerful than the weakening Ottoman state.

Events leading to the massacres

The origin of Armenian unrest can be traced, in large part, to the success of Imperial Russia in the Russo-Turkish War, 1877-78. At the end of the war, based on the Treaty of San Stefano the Ottoman government had to give away a large part of territory (including the cities of Kars and Batumi) to the Russians. The Russian government claimed they were the supporters of the beleaguered Christian communities within the Ottoman Empire and clearly, the Russians could now beat the Ottomans. The Treaty of Berlin - which reduced the magnitude of Russia's gains on the other side of the Black Sea - stated that the Ottoman government had to give legal protection to the Christian Armenians, but in the real world, the treaty's protections were not implemented. Template:Sidebar with collapsible lists Template:Armenian Genocide The combination of Russian military success, clear weakening of Ottoman power, and hope that one day all of the Armenian territory might be ruled by Russia led to a new restiveness on the part of the Armenians still living inside the Ottoman Empire. Added to this was the fact that the Ottomans never applied justice evenly in disputes between Christians and Muslims (see Dhimmi).

Starting around 1890 the Armenians began clamoring to obtain the protections promised them at Berlin. Unrest occurred in 1892 at Marsovan and in 1893 at Tokat. Armenians wanted reforms in the Ottoman Empire and an end to the discrimination imposed upon them, with demands for the right to vote and the establishment of a constitutional government[2].A near revolt occurred in the Sassoun Mountains of Bitlis Province. Armenian peasants refused to pay the Kurdish incremental taxes, a double taxation system imposed on the Armenians by Kurdish chieftains. In 1892, the governor of the Mus district in Bitlis Province encouraged Armenian resistance claiming that the Armenians: 'Couldn't serve two masters at the same time.'

In response to the resistance in Sassoun, the Turkish governor of Muş responded by inciting the local Muslims against the Armenians[3]. The historian Lord Kinross claims that this was often achieved by gathering Muslims in a local mosque and claiming that the Armenians had the aim of "striking at Islam."[4] The Sultan, Abdul Hamid II, sent the Ottoman army into the area and also armed groups of Kurdish insurrectionists. The violence spread and affected most of the Armenian towns in the Ottoman empire. The worst atrocity occurred when the cathedral of Urfa, in which three thousand Armenians had taken refuge, was burned[5]. The historian Osman Nuri, in the second volume of his three-volume biography of Abdul Hamid, accused Sultans military contingent of 'torching and killing many people.'

On August 26 1896, a group of Armenian revolutionaries raided the headquarters of the Ottoman Bank in Istanbul. Guards were shot and more than 140 staff members were taken hostage - all in an attempt to gain international attention for the plight of Armenians in the Ottoman Empire. Template:Main

In response, tens of thousands of Armenians were massacred, both in Istanbul and elsewhere in the Ottoman Empire. Abdul Hamid's Private First Secretary wrote in his memoirs about Abdul Hamid that he 'decided to pursue a policy of severity and terror against the Armenians, and in order to succeed in this respect he elected the method of dealing them an economic blow ... he ordered they absolutely avoid negotiating or discussing anything with the Armenians and to inflict upon them a decisive strike to settle scores.'

The killings occurred from 1895 until 1897. In that last year, Sultan Hamid declared that the Armenian question was closed. All the Armenian revolutionaries had either been killed, or had escaped to Russia. The Ottoman government closed Armenian societies and restricted Armenian political movements.

These events are recalled by the Armenians as the "Great Massacres". The Armenians believed the Hamidian measures proved the capacity of the Turkish state to carry out a systematic policy of murder and plunder against a minority population. The formation of Armenian revolutionary groups began roughly around the end of the Russo-Turkish War of 1878 and intensified with the first introduction of Article 166 of the Ottoman Penal code 166, and the raid of Erzerum Cathedral. Article 166 was meant to control the possession of arms, but it was used to target Armenians by restricting them to possess arms. Local Kurdish tribes were armed to attack the defenseless Armenian population. Some diplomats believed that the aim of these groups was to commit massacres so as to incite counter-measures, and to invite "foreign powers to intervene," as Istanbul's British Ambassador Sir Philip Currie observed in March 1894. Even some Turkish authors admit the existence of those revolutionaries was just a pretext for the massacres.

These mass killings clearly were a first step towards the Armenian Genocide of 1915-1917.