Difference between revisions of "Gtichavank Monastery" 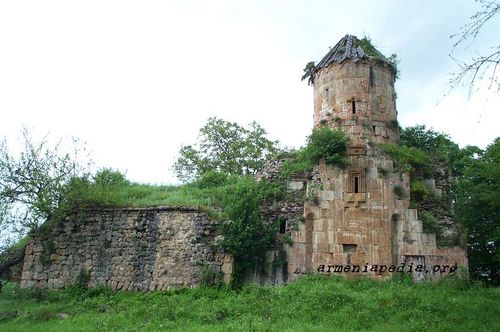 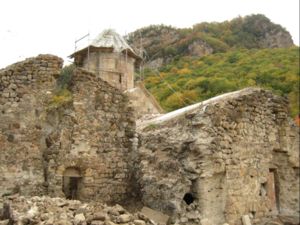 Gtichavank Monastery ★85 ⟪39.593676, 46.942456⟫ (Գտչավանք, technically pronounced Gətəchavank, and more properly transliterated Gtchavank) is one of Artsakh's finest monuments. Built in the 10-13c, this architectural gem sits on a beautiful forested mountain with great views. It is sadly defaced with graffiti, including on the intricately carved khachkars, though a large ongoing restoration project should eventually address this.

Gtichavank was once seat to the region's religious leaders, with a school, scriptorium and library. Manuscripts say that before the present monastery was built, a famous church, which attracted many pilgrims stood, which was destroyed during Arabic rule. According to the inscription over the north door, the church was built from 1241-1248 with much toil by the brothers Sargis and Vrtanes, bishops who moved here from Amaras. They complained that these were rough times, with the Mongols ravaging everything. At the end of that century, the complex was expanded further, reaching the peak of it's prosperity as an important center of Armenian religion, politics and culture.

The fan-roofed main church is the finest structure of the complex, built from trimmed blocks of yellowish stone quarried in monastery's surroundings. There are intricate khachkars on either side of the interior portal, the S khachkar inscribed: "In the year 1246, I, Ter Vrdanes put this cross for the peace of my soul". Under the slabs on the floor are buried some of the clergy who served here, and some of Dizak’s princes.