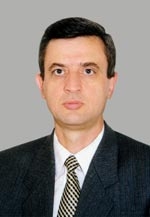 Mr. Minasyan graduated in EPM engineering from the Yerevan Polytechnic Institute in 1972.

From 1972-1997 he worked first as an engineer and later, senior scientific associ­ate, head of a subdivision, and then head of the data processing unit at the Yerevan Scientific Research Institute of Mathematical Machines. From 1998-1999 he was an advisor to the prime minister.

From 1997-1999 he served in the NA from the proportional list of the Republic bloc. He was a member of first the Republic Faction and later Yerkrapah Deputy Group.

From 1999-2003 he served in the NA from the proportional list of the Unity Alliance and he was first a member and later chairman of the NA Standing Committee on Financial-Credit, Budgetary and Economic Affairs. He was also a member of the Unity Faction.

Mr. Minasyan is married and has two children.