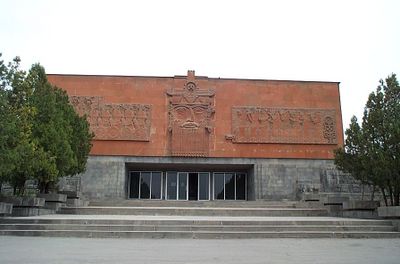 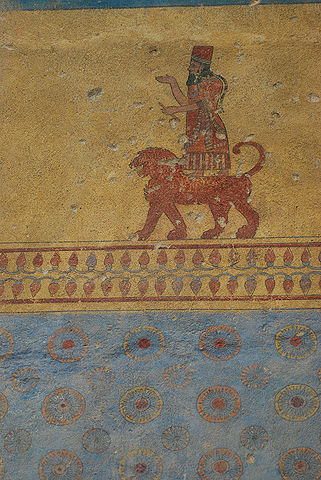 The unification of Nairi tribes in the middle of the ninth century B.C. in the southern part of the Armenian plateau completed with the formation of the kingdom known as Urartu. Having strengthened its position over a short period, it became one of the mighty slave-owning states of the Ancient East. Under King Argishti I, who reigned in 786—750, the Urartians conquered Ararat plain — an enormous territory spreading as far north as the lakes of Sevan and Chaldyr.

The fertile Ararat plain played an important role in the political and, especially, economic life of the Urarts who did much construction work there. They built not only small fortresses (Aragats), fortified cities (Argishtikhinili, Teishebaini), but also engineering and hydraulic installations connected with agriculture.

Among the earliest and biggest towns there was Yerebuni situated on Arin-berd hill (the south-eastern outskirt of what is now Yerevan), a major administrative and economic center of the northern part of the country. According to the Khorkhor cuneiform record and two other identical records found in the citadel, Yerebuni was built by Argishti I in 782 B.C. (this date is considered that of the foundation of Yerevan). In honour of founding the city, a painted wooden figurine of an armed warrior was made, with a cuneiform inscription on a bronze pedestal. This confirms the significance of Yerebuni as an important military stronghold of the country. This small sculpture is an interesting specimen of Urartu art.

Yerebuni, built after the pattern of Urartu settlements, had a rather clear-cut layout. Town neighborhoods were situated at the foot of a nearly 65-m high hill crowned with the citadel which was the architectural dominant of the surrounding locality. The citadel commanded a full view not only of the cramped town layout, but also of the Ararat plain with its settlements and the main roads leading to Yerebuni.

The configuration of the hill top determined the triangular shape of the citadel’s plan. The blank 12-metre high walls, which were built flush with the steep slopes of the hill and fortified with regularly spaced rectangular buttresses, gave the citadel a formidable and forbidding appearance. The entrance to the citadel was on the southeastern, more gently sloping, side. At the entrance, the walls were erected in two and three rows, which split the monolithic exterior in this part of the citadel and livened up its severe appearance to a certain extent.

Another element of variety was a six-column portico which stood left of the road and accentuated the entrance to the citadel. The portico was painted with colorful frescoes, and the stairway which led up to it was flanked with bronze figures of winged oxen with human heads.

Various stages of the construction of the citadel have been ascertained. After the town of Teishebaini had been built nearby, Yerebuni lost its importance but was not destroyed when the state of Urartu fell in the seventh century B.C. Life in it resumed under Akhemenid viceregents in the fifth-fourth centuries B.C. The layout of the citadel shows the thoroughly planned arrangement of premises around the inner yeards, which goes all the way back to Khett and Assyrian traditions. The reconstructed parts of the complex shows that Urartu architects had refined artistic taste.

The citadel comprised palaces, houses of worship and service premises situated at various levels, depending on the hill surface, and interconnected by stairways. This, as well as the varying heights of palaces and service buildings, imparted to the citadel of Yerebuni a stepped silhouette characteristic of such structures on the Armenian upland.

The main entranceway led to the central yard which was reserved for all sorts of ceremonies and for the parades of the personal guards of Argishti I and of the fortress’ garrison.

In the south-western part of the yard there was the temple of god Khaldi — an oblong large hall with an auxiliary room and a staircase leading to the roof of the tower, and an open 12-column portico, with columns in double rows, where the garrison was probably drawn up. The walls are lined with benches for notables and, at the left end wall, there is an altar for sacrifices. In this temple, developed along its transverse axis, the openwork colonnade contrasted with a powerful ziggurat-like tower built in accordance with the Mesopotamian tradition.

The temple was richly ornamented. Its walls were painted with colorful representations of human figures and gods, with geometrical and floral ornaments. The composition of the murals was two dimensional and based on the alternation of the horizontal strips of the ornament with the figures of animals and people. Of special interest is the representation of god Khaldi standing on a lion, with a warder in his left hand and with a horned tiara on his head; it is similar to the bas-relief representation of god Teisheba in Adildzhevaz and many others known in the art of Urartu and that of the ancient East.

As distinct from the clay-coated adobe floors, faced with stone slabs, the floor in the temple of god Khaldi is made of small wooden planks, like the modern parquet-floor. The north-eastern side of the yard was completed by the palace of Argishti I, which consisted of large halls, Susi temple, peristylar and service yards surrounded with residential and service rooms.

Judging by the rich decoration of its walls, the peristylar yard, one of the most ancient ones in the Ararat plain, was used for conferences and receptions. It communicated with Susi temple, devoted to god Iushba - a small rectangular structure intended for Argishti I and his retinue. An opening over the credence altar served to let in daylight and draw the altar smoke out. There was another credence altar which stood outside the temple, in the middle of the peristylar yard. The interior and exterior walls of the building were painted sky-blue. Next to the temple there were service premises incIuding two wine stores with enormous (up to 600 liters) jars for wine used in sacrifice offering ceremonies.

The biggest of the halls, which adjoined the peristyle from the north-east, was probably the personal residence of Argishti I. As distinct from other promises it was more richly decorated. The murals showed rhythmically arranged stripes, palmettes, stepped towers, life trees with priests, rosettes, squares with concave sides, lions and oxen. Judging by holes from bronze nails, the lower parts of the walls, under the frieze, were hung with carpets.

Cuneiform inscriptions, cut not only on the stone walls but also on the column bases, say that shortly upon being completed, the palace was expanded. Argishti had new premises, organically connected with the fortress layout, added to its south-eastern side.

The front hall with five wooden columns is of special interest. Shifted a little from the longitudinal axis to the southwestern side of the hall, they introduced a certain rhythmic element to the space of the enormous hall (480 sq m). Combined with murals, the columns added to the solemn atmosphere of the hall and played a role in organizing its space. One of the frescoes showed a large scene of hunting, with a nobleman driving in a chariot accompanied by leopards. Another fresco showed a peasant with an oxen-drawn plough, and the third one a herd of cattle a gift to the king. These are the first Urartu frescoes on secular themes (the representations of gods, lions, oxen, squares with concave sides, reminiscent in their style and manner of execution of the similar earlier frescoes of Yerebuni's presence chambers).

Yerebunis frescoes are typical of the Ancient East. They have much in common with Assyrian ones, but have characteristic features all their own.

The loss by the Urartians of their state independence in the 6th century B.C. and the establishment of the Akhemenids’ domination led to substantial changes in the architectural composition of Yerebuni citadel. The main yard, greatly reduced in size, lost its importance as the nucleus of the complex’s layout which became denser. As a result the monumental structures lost their solemn appearance.

The temple of Khaldi was rebuilt into a thirty-column apadana for the official receptions of the Iranian viceregent in the Ararat plain. The outer walls, fortified with pilasters, created the impression of emphasized mightiness. which was in a striking contrast with the interior. Slender columns, rhythmically arranged along the facade and in the depth of the interior imparted lightness and clarity to its composition.

Reconstructions were made in the peristylar yard which lost its initial purpose. The temple of Susi was turned into a fire worshipping temple, and another fire worshipping temple was built in the north-eastern corner of the yard. This temple consisted of three small premises with blank walls and niches with steps.

The Urartians’ architectural and artistic tradition, vividly represented in Yerebuni and in other Urartu monuments, played a prominent role in the further development of architecture on the territory of the Armenian upland.