Difference between revisions of "Ashot Aghababyan" 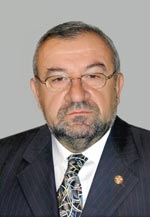 Ashot Aghababyan was born on November 8, 1952 in Yerevan.

Mr. Aghababyan received his degree in economics from the Yerevan Institute of National Economy in 1978. In 1996 was was awarded a medal for military services.

From 1970-1972 he served in the Soviet Army. In 1974 started work in the Yerevan Silk Mill. He spent three years there as a metal worker. From 1977-1978 he worked first as an economist and later as an engineer in the Yerevan Knit Wear Industrial Complex. In 1979 he was a senior economist in the transportation trust Hayoughevortrans. From 1979-1980 he was the manager of shop under the food-trading unit # 3 of the Yerevan City Council. From 1980-1983 he was an assistant manager in shop under the Yerevan food-trading unit # 6 and for the next decade he managed shop under the Yerevan food-trading unit # 4. In 1988 he took part in the Karabagh war serving in Yeraskhavan, Noubarashen, Noyemberyan, Lachin, etc. He was a member of the mili­tary council and headed the army headquarters. In 1990 he was elected a deputy in the Mashtots regional council. From 1993-1999 he was the general director of the Hrazdan Sport Complex and in 1999 was appointed its president. In 2002 was elected president of the Yerevan Football Federation.

On May 25, 2003 was elected as a deputy to the NA from electoral district # 48 where he is on the NA Standing Committee on Science, Education, Culture and Youth Affairs. He is a member of both the Republican Party of Armenia Faction and party.

Mr. Aghababyan is married and has three children.