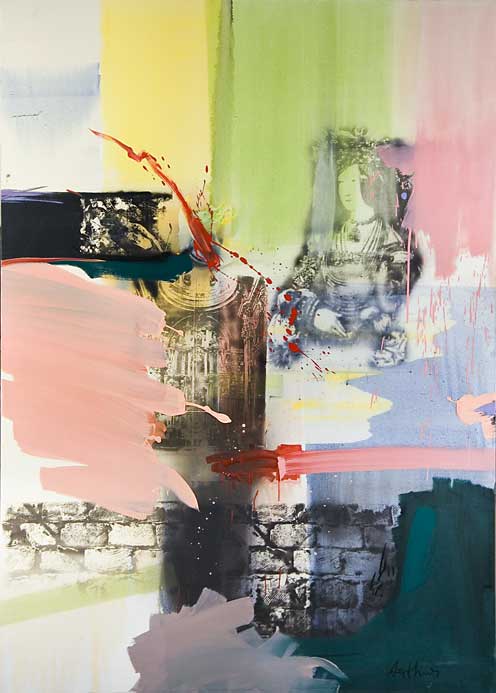 In Sarkissian’s paintings what-is-known meets what-is-felt within the bounds of the picture plane. What is “felt” – embodied in Sarkissian’s painterly gestures and rich coloration – maintains its integrity, and what is “known” – concretized in the images Sarkissian finds in mass media and transfers to the heart of his artworks – continues to evince its source in widely disseminated formats such as newspapers and books. But despite this obvious polarity, Sarkissian effects a remarkably easy and unstrained flow between the felt and the known, between raw brushstroke and transferred image. Each element becomes not just a foil, but a partner, for the other. A passage lifted (not literally, as in collage, but photographically, through silkscreen) from an art history textbook or illuminated manuscript or magazine still “reports” its information, but becomes at the same time a factor in a larger composition, enmeshed in painterly incident. Meanwhile, without losing the passion invested in it by Sarkissian’s hand, such painterly incident is ordered into a certain rational structure, one that echoes the lexical coherence that photographic imagery promulgates. Sarkissian’s paintings are at once wholes and sums of parts, and they “talk” to us in several visual languages at once. Such a polyglot, polysemic art is hardly unique to Sarkissian. We see his style anticipated by Robert Rauschenberg, and before him Kurt Schwitters. We even see its textures and practices, as well as philosophical positions, reflected in the work of such disparate predecessors as Warhol, Cornell, Miro, Malevich, and, of course, Picasso. Among other things, Sarkissian demonstrates that the “collage aesthetic” – the simultaneously disjunctive and conjunctive qualities that uniquely define modern composition – remains one of 20th century art’s most significant and enduring legacies. Indeed, this collage aesthetic provides the perceptual crucible in which the dialectic described above is forged, and it defines the particular visual world in which Sarkissian finds his expression.