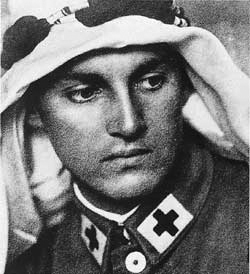 Armin T. Wegner was born on October 16, 1886 in the town of Elberfeld (now suburb of Wuppertal)/ Rhineland in Germany. At the outbreak of World War I, he enrolled as a volunteer nurse in Poland during the winter of 1914-1915, and was decorated with the Iron Cross for assisting wounded under fire. Following the military alliance of Germany and Turkey, he served in the German Sanitary Corps of the Turkish Army during WWI. As a personal caretaker of Field Marshall von der Goltz, he traveled with him along the Baghdad railroad in Mesopotamia, where he witnessed the Armenian Genocide.

Disobeying orders intended to stifle news of the massacres, he gathered information on the Genocide - collected notes, annotations, documents, letters and took hundreds of photographs in the Armenian deporation camps - visible proof of the systematic destruction of the Armenians. At the request of the Turkish Command, Wegner was eventually arrested by the Germans and was recalled to Germany. His photographs were confiscated and destroyed, however, he managed to smuggle some emulsions in his belt with images of the Armenian Genocide.

In an open letter, which was submitted to American President Woodrow Wilson at the peace conference of 1919, Wegner protested against the atrocities perpetrated by the Turkish army against the Armenian people, and appealed for the creation of an independent Armenian state. The tragedy of Armenian people to which he had been a witness in the Ottoman Turkey haunted him the rest of his life.

In the 1920s Wegner reached the height of his success as a writer and a co-creator of German Expressionism. He became a celebrity with his book, Five Fingers Over You, which foresaw the advent of Stalinism.

Wegner was also one of the earlier voices to protest Hitler's treatment of the Jews in Germany. He was the only writer in Nazi Germany ever to publicly protest against the persecution of the Jews. In 1933 he was arrested by Gestapo, a few days after he sent an open letter to Hitler protesting the state-organized boycott against the Jews of Germany. He would suffer incarceration in seven Nazi concentration camps and prisons before he could make his escape to Italy.

In 1956 Wegner was awarded the Highest Order of Merit by the Federal German Government. The city of Wuppertal, where he was born, decorated him with the prestigious Eduard-Von-der-Heydt prize in 1962.

Armin Wegner dedicated a great part of his life to the fight for Armenian and Jewish human rights. In 1967 he was awarded the title of Righteous Among the Nations by Yad Vashem in Israel, and in 1968 he received an invitation to Armenia from the Catholicos of All Armenians and was awarded with the Order of Saint Gregory the Illuminator.

He died in Rome at the age of 92 on May 17, 1978. In 1996 part of his Ashes were taken to Armenia, where a posthumous state funeral took place near the perpetual flame of the Armenian Genocide Monument.

In 2003, the Armin T. Wegner Award was created by the Arpa Foundation for Film, Music and Art as a humanitarian honor, awarded to a motion picture that contributes to the fight for social conscience and human rights, a struggle to which Armin T. Wegner devoted his life.