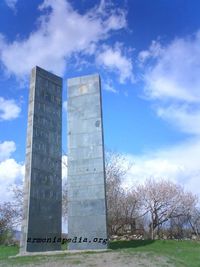 The Armenian Alphabet was invented in 405 AD by Mesrop Mashtots with the assistance of Sahak Partev in order to translate the Bible into Armenian.

It is important to remember that the Eastern and Western dialects differ in transliteration, because some Armenian characters are pronounced differently. For example, in Armenian, the equivalent of the English name Peter, is Petros in Eastern Armenian, and Bedros in Western. As you can see the P and the T are pronounced differently in Western Armenian. This name would be Pedro in Spanish, where only the letter T has changed. This is because the Armenian alphabet contains a few "middle sounds" which English has for the most part lost. For example, the P and B sounds have a sound somewhere in between those two sounds that English speakers (and often Western Armenians) will have a very difficult time perceiving. If you say the English word "sports", you may notice that you are actually pronouncing this middle sound without even noticing it. Most people are not pronouncing a clean P, but something that sounds more like a B, but not quite... this is the sound that Eastern Armenian uses for the second letter of the Armenian alphabet. Western Armenians do not use this difference as much, pronouncing more of a clean B. Western Armenian also differs in vocabulary and conjugation from Eastern Armenian, which is used in the Republic of Armenia today. A brief guide/dictionary of differences between the two dialects can be found here.

Knowledge of the Armenian alphabet is useful but not essential for appreciation of Armenia's cultural patrimony. However, one sure way to impress on-lookers, including local worthies, is by deciphering the date on medieval inscriptions. Dates are generally marked by the letters ԹՎ or the like, often with a line over, indicating "t'vin" ("in the year") followed by one to four letters, each of which stands for a number based on its order in the alphabet. In the Middle Ages, Armenians used a calendar that started in 552 AD as the beginning of the Armenian era. To translate into standard years, simply add 551 to the number. Thus, should you see an inscription reading ԹՎ ՈՀԳ, simply check the alphabet table below and see that this equals 600 + 70 + 3 + 551 = 1224.

On October 28 and 29, Harvard hosted an international conference to consider the achievement of Mashtots, its historical background, and its wider influence. Organized by Russell, the conference was sponsored by the Armenian Prelacy of New York, the Davis Center for Russian and Eurasian Studies, and the Department of Near Eastern Languages and Civilizations at Harvard. It was held under the patronage of His Holiness Aram I, Catholicos of the Great House of Cilicia.