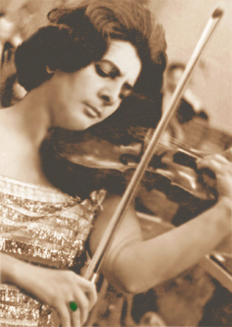 
In 1950 she graduated from Yerevan State Conservatory (as a student of Professor Karp Dombayev), in 1954 she completed her graduate course at the Moscow State Conservatory (adviser - Professor Konstantin Mostras).
She began performing professionally at the age of 15. Since 1954 she has been the principle soloist at the Armenian Philharmonic Hall.
Ms. Tsitsikian performed throughout the republics of the former Soviet Union and in 27 countries around the world. As a violinist she produced 3 vinyl discs with the “Melodia” label and recorded numerous soundtracks at the Armenian and Russian Radio archives.
Music of Armenian composers held a special place in Ms. Tsitsikian’s repertoire. Often as a first interpreter she assisted and edited various original pieces of her colleagues/composers.
From 1950 she worked as a professor at the Yerevan State Conservatory; established three new courses in its curriculum: “The History of Bowed Instruments”, “The History of Armenian Performing Art”, and a “Course of Music Teaching Practice”.
Since she was a student of the Conservatory, Tsitsikian started researches in the field of music history: bowing art, instrumentology and Music archaeology, which she founded in Armenia. She participated and gave lectures in numerous International Conferences and wrote articles in Armenia and abroad.
During her artistic life Professor Anahit Tsitsikian had performed in more than 1000 recitals, recorded many pieces of library music, was the author of 300 articles, scenarios for many radio and television programs, and lectured internationally.
She was a member of many organizations such as: Composer’s Union of Armenia, Composers of USSR, Armenian Theater Union, Journalist’s Union, Women’s Committee of the USSR, member of AOKSZ (The Cultural liaison committee of Armenia with foreign countries), in “History of World Culture” Committee in the Academy of Science, USSR; The World scientific Association of Historical Archaeology etc.
Anahit Tsitsikian was a Merited Artist of Armenia (1967), a PhD of Musical
Science (1970), and held a Professor degree in Music (1982).