Ghapama is a traditional eastern Armenian food, often served during new years and Christmas. It is pumpkin stuffed with rice, dried fruit, raisins, etc. There is a very famous Harout Pamboukjian song about Ghapama. 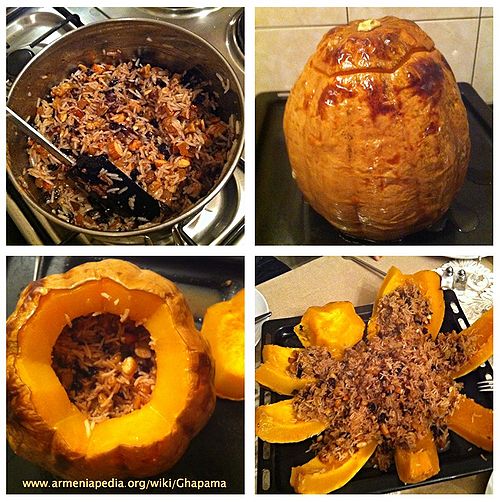 Ghapama being made and served

This is by far the best most amazing ghapama recipe I have ever tasted, and a huge crowd-pleaser!

Ghapama for one cup of rice (works well with an approx 3kg (7lb) pumpkin or alternatively a butternut squash that is shaped more like a pumpkin. You can increase or decrease the amounts depending on the size of your pumpkin or squash):

11. Put the cup of rice in 3 cups of cold water on high heat for about 15 minutes (it will boil towards the end)

12. The rice should not be fully cooked, or it will become mush, but at least halfway cooked

13. Strain the water from the rice well

14. Drop the butter into the hot rice to melt quickly

15. Mix all the ingredients and the fully drained rice together

16. Mix half of the honey with this mixture

19. Wash the pumpkin, cut the pumpkin top off in a way that it can be placed back on top, remove the seeds, and clean the pulp out with a spoon (you can also do this while the rice is put to boil to save time)

20. Spread the remaining honey inside the pumpkin walls

21. Fill the pumpkin with the mixture

22. Leave enough space to cover the head with the carved part of the head

26. Poke the pumpkin with a fork or a knife starting as early as 40 minutes for smaller/thinner pumpkins

27. If nice and soft (the fork goes into the pumpkin wall very easily), the ghapama is ready

28. Take it out and serve immediately, or after a little cooling

29. Cut the pumpkin vertically along the ridges 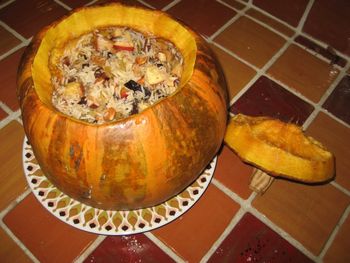 In bowl, mix cooked rice (only half cooked or the rice may turn to mush), washed raisins, dried prunes/apricots/peaches, apples (cubed small), and cinnamon. Mix and stuff pumpkin, pour on honey (or mix in sugar if you don't have honey). Put top of pumpkin back on and bake at 150 Celsius (300F) until soft (poke with toothpick to determine).

Bring pumpkin to table whole and cut it up there to serve it.

Ghapama: Dress up the Holiday Table with an Armenian Tradition

Yellow pumpkins harvested at end of autumn paint Yerevan markets like little pieces of the sun. Pumpkin jam waits at the end of their service to the Armenian table. But a tastier dish from the golden globes is an Armenian tradition heralded by the falling leaves and the first bite of winter wind.

Ghapama season is here and women such as 37-year-old Hasmik Harutyunyan feel it a matter of family duty, met with pleasure.

In her Echmiadzin kitchen the three-kilogram pumpkin is on the table. She has put raw rice, honey, butter, raisins, black dried plums and dried apricots in separate plates.

First she puts a cup of raw rice in water in a separate pan, and puts it on a slow fire. She stresses that it is necessary to cook the rice without salt.

Then Hasmik playfully juggles the pumpkin looking for its “hat”. The housewife cuts round the upper part of the pumpkin and puts it aside, and then she starts the main part of the work.

“It is necessary to put your hand inside the pumpkin and try to clean it properly, to remove the whole pulp,” she says and quickly fills a tray, next to the pumpkin, with pumpkin seeds and the stringy fibrous bits that look like orange hair.

She removes all the entrails and then washes the pumpkin.

Step one after the cleaning is to spread melted honey on the inner walls of the pumpkin. Meanwhile, rice is cooked. Hasmik takes it off the fire and pours cold water on the cooked rice, so that rice remains tight. At the end she adds some salt.

While preparing the dish, she sings a song dedicated to ghapama.

“It is not accidental at all that people have created this song, you will taste ghapama and see how tasty it is, how well it smells, and besides, pumpkin is a very healthy vegetable, especially with honey,” she says.

“After spreading the honey on the inner walls of the pumpkin, we put a piece of butter on the bottom, then we add a spoon of honey, then fill in some part of the rice, cooked beforehand and mixed with raisin, then we add the dried plums and apricot to the rest of the rice,” Hasmik says. “We add the rice with dried fruit, at the end we add another spoon of honey and we put a piece of butter on the top. At the end, we put the ‘hat’ on the pumpkin.”

And then the pumpkin stuffed with rice and dried fruit is put into the oven at 100 degrees Celsius. It is cooked there for about 40 minutes.

The synthesis of aromas of the pumpkin, rice and dried fruit is amazing, and it is spread in the whole house. Hamik’s children enter the kitchen and look at her with a question in their glances: “Isn’t the ghapama ready?”

The ghapama is ready in 40 minutes; the children are also ready to enjoy the dish. The ‘happy ghapama’ is smiling in the middle of the table. Hasmik cuts into the ghapama and rice flows from the pumpkin like a thick white river. Then raisin and dried fruit come.