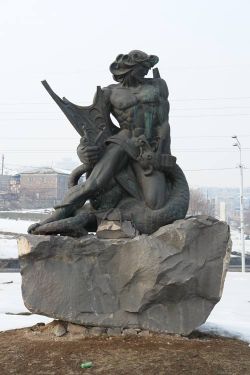 Vahagn (Armenian: Վահագն) was Armenia's national god, comparable to Heracles in Greek Mythology. He was known as a slayer of vishaps. Some time in his existence, he formed a "triad" with Aramazd and Anahit. When Zoroastrian ideas were pervading Armenia, superseding the gods of the country, there was so much vitality in Vahagn's worship that Mithra himself could not obtain a firm foothold in that land, in the face of the popularity of his native rival. Vahagn consists of two words; Vah-“The god”, agn-“a fire”, and means the God of Fires. Vahagn is the God of Power, War and Victory. He is the son of the God Aramazd. The chief temple of Vahagn is on the Kharke Mountain near the temples of Golden Mother Anahit and the God Beauty-Astghik. According to the ancient Armenian calendar, the 27th day of every month is named Day of Vahagn. The old historian Khorenatsy preserved a poem about birth of Vahagn. Every year on the 21st of March Armenian pagans celebrate Vahagn‘s birthday. 2006 corresponds to the 9890th anniversary of Vahagn's birthday. Historian Moses Khorenatsi managed to preserve part of a song dedicated to Vahagn, which goes as follows:

In travail were heaven and earth,

In travail, too, the purple sea!

The travail held in the sea the small red reed.

Through the hollow of the stalk came forth smoke,

Through the hollow of the stalk came forth flame,

And out of the flame a youth ran!

Fiery hair had he,

Ay, too, he had flaming beard,

And his eyes, they were as suns!