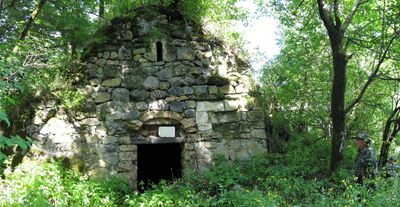 Among the monuments of Ptretsik river’s valley a special place occupies monastery Otskan, or Otskanvank. To get to it, one needs to overcome difficulties, connected with there being no road. “Travelling” by route Badara/Ptretsik- monastery Otskan by narrow path 7-8km long, especially when it takes place in autumn, gives much pleasure and gives chance to see nature in its original beauty.

Really, the choice of monastery Otskan’s place is very successful. It is situated in a forest among rare meeting tree, on top of a mossy cliff.

The monastic complex consists of a church, several destroyed constructions and an ancient cemetery. The well-preserved unharmed one-nave church with vaulted cover is a basilica. In the northern part of the praying-hall are situated two different vestries.

The church as also other cult constructions of Ptretsik is built from untrimmed stone. The entry is from west, two windows look at east, one looks at north. There are four bays in walls. The epigraphic inscriptions on trimmed stones and khachkars, put in temple’s walls are harmed and half-obliterated. Fortunately the mentioned names are familiar- Arzu Khatun and Smbat. Arzu Khatun was the wife of Vakhtang, prince of Upper Khachen, and as has already been mentioned in 1214 he built the Cathedral church of Dadivank. Prince Smbat’s name is mentioned on khachkars of monasteries Okhti Yeghtsi and Tsera Nahatak. So, fragmentary epigraphic inscriptions of khachkars of church Otskan vank tell about events of XIII- XIVcc.