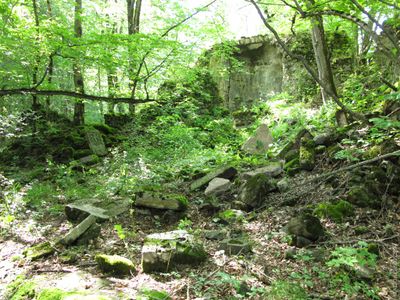 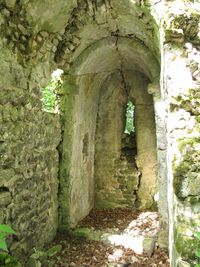 From village Badara/Ptretsik the road 7-8km long takes up, where on a hill among trees is situated monastery Okhti Yeghtsi (seven churches). Here remain number of buildings of the complex, six of which join each other, though have separate entries and windows, and the three others are built in their surroundings. Besides them here are also noticeable traces of other four constructions. So the complex consists of 13 cult and worldly buildings. All the buildings are one-nave halls with vaulted covers. They are built from roughly-trimmed stone.

Though in architectural-artistic aspect the complex doesn’t present certain interest, but thanks to its position and harmonious accord with the surroundings nature, the monastic ensemble leaves an imposing impression. The complex stands out by unique volume-space solution, namely by interesting grouping of buildings. As is seen from the general plan the main constructions are quite well placed around the common space. By facades and windows they all look at the yard. Along them are put khachkars, which even more outlines the expressiveness of the monastery. In fact, the yard has turned into a unique gallery of khachkars under the open sky. In the monastic complex also attract attention churches with rectangular in scheme altar apsides. There are many such churches. Their analogues can be seen also in other regions of the area. Churches with rectangular altar were quite spread and accepted in Armenian cult architecture (since the early medieval epoch up to XXc). About it evidence numerous preserved churches in Artsakh, in neighboring Syunik and in other provinces of Central Armenia.

Monastery Okhti yeghtsi stands out also by its epigraphic inscriptions, khachkars with images of people and robbed in clothes riders, by two large settlements, stretching around the monastery, and by large cemeteries. The inscriptions evidence that the monastic complex with the settlements was built in XII- XIIIc. The khachkars are dated 1156, 1165, 1193, 1216 and following ages (12 epigraphic inscriptions are published). They are covered with thin delicate carving and by the art of realization belong to Khachenian khachkars. The inscription on one of the khachkars of mausoleum placed in the northern part of the complex reads: “In the summer of 607 (1158). I, Smbat, Vasak’s son put this cross in the memory of my son Davton, who transferred to Christ in his young age”.

A khachkar from white stone (sizes 1,1x0,65m) next to which in the wall are put also others, presently scattered around the church, gravestones with half-rubbed off inscriptions and relieves of religious and worldly theme.