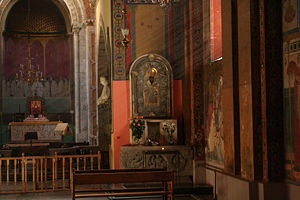 Interior of Armenian Cathedral in Lviv

In the 14th century, while it was still a part of Poland, the rulers allowed self-government for the Armenians, which attracted a big Armenian community that built its Armenian Cathedral in 1363. The Armenians were governed by the laws set down by Mkhitar Gosh (the law giver) in Armenia.

In Decebmber 2005 the Religious Information Service of Ukraine [1] quoted Father Tadeos Georgian, the pastor of the cathedral, on acts of vandalism which are committed near the church every day: strangers break bottles, windows, fences, and so on. "The truth is, though, lately they have not left offensive writings on the walls, as it used to be in the past. For this reason, we addressed the police but we were told they do not have enough officers. To hire guards is the only way out for us. But this is also problematic: we have to pay for their service and we lack money. We also need to have window grates made, which requires a small fortune. Therefore I am addressing the authorities to think how to save our church from vandals."

The Armenian Cathedral in Lviv dates back to the 11th century