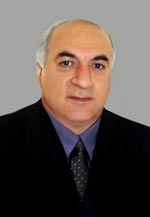 Mr. Badalyan received his degree in civil engineering from the Yerevan Polytechnic Institute in 1983.

From 1966-1969 he worked first as a worker and later as an engineer-constructor and chief technologist in the Spitak Sugar Factory. For the next thirteen years he worked as a technician and later as a skilled worker, chief engineer and director of the Leninyan region water and sewage department under the executive committee of Yerevan City Council. From 1981-1995 he worked as an engineer and later as a field head, deputy director and finally director in the Yerevan Plant of Chemical Reactives. From 1995-1999 he was the president of the Chimreactive OJSC. In 2001 he was presi­dent of the Agricultural Producers and Seed Growers' Union. In 2002 he was co-direc-tor of the NGO Armenian Toiler.

From 1995-1999 he served as a deputy in the NA (electoral district # 102) and was a member of the Republic Faction and later the Reforms Deputy Group.

1999-2003 was his second term as a deputy in the NA (from the Unity alliance) where he served first on the NA Standing Committee on Financial-Credit, Budgetary and Economic Affairs and later on the NA Standing Committee on Foreign Relations. He was first a member of the Unity Alliance, then later was not involved in any faction or deputy group, and then he headed the People's Agricultural and Industrial Union Deputy Group.

On May 25, 2003 he was reelected as a deputy to the NA from electoral district # 35 and currently sits on the NA Standing Committee on Financial-Credit, Budgetary and Economic Affairs. He is not included in any faction or deputy group and has no political party affiliation.

Mr. Badalyan is married and has two children.