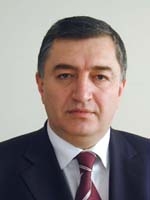 Vladimir Badalyan was born on October 4, 1958 in Yerevan.

Mr. Badalyan received his degree in concentration engineering from Yerevan Polytechnic Institute in 1980.

From 1980-1981 he worked first as a skilled worker and later as an engineer in the mining and metallurgic plant of Jeskazgan, Kazakhstan. From 1981-1985 he worked as an engineer in the Yerchimshin trust. For the next five years he was involved in the activ­ities of the communist youth organization. From 1990-1991 he worked in the LYCU and from 1991-1998 he worked as a co-director in the Erzroum Scientific Research Association. From 1998-1999 he was deputy head in the Administrative Department of the RA Government and from 1999-2003 he was director of the Hrazdan Sport Complex.

On May 25, 2003 was elected as a deputy to the NA from electoral district # 16, is currently on the NA Standing Committee on Foreign Relations. He is a member of the “People's Deputy” Deputy Group, and has no political party affiliation.

Mr. Badalyan is married and has two children.