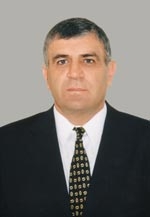 Mr. Matevosyan graduated with a degree in engineering-mechanics from the Yerevan Polytechnic Institute in 1980.

1999-2003 was his first term as a deputy in the NA (electoral district # 72) and he sat on the NA Standing Committee on State and Legal Affairs. He was also a member of the Unity Faction.

Mr. Matevosyan is married and has three children.