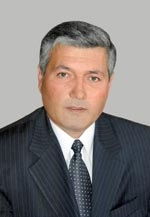 Vardan Mkrtchyan was born on October 3, 1954 in Yerevan.

Mr. Mkrtchyan graduated from the Yerevan Polytechnic Institute in 1976. He is an engineer and energy mechanic.

From 1971-1980 he was a worker and then head of field in the Hayelectramekena Plant. For the next six years he worked as a senior scientific associate in the All-Union Scientific Research Institute of Technical Machine Industry. From 1986-1989 he was a head of production in the Araks Plant. For the next eleven years he was the assistant to the chief engineer in the Hayelectramekena Plant. In 1999 he was appointed Deputy Minister of Industry and Trade.

1999-2003 was his first term as a deputy of the NA (from the proportional list of the Unity Alliance) and he was on the NA Standing Committee on State and Legal Affairs. He was the secretary of the Unity Faction, later a member and then a member of the People's Voice Deputy Group.

On May 25, 2003 he was reelected to the NA from the proportional list of the Justice Alliance and he is currently on the NA Standing Committee on State and Legal Affairs. He is a member of the Justice Faction and the secretary of the board of the Armenia People's Party.

Mr. Mkrtchyan is married and has two children.