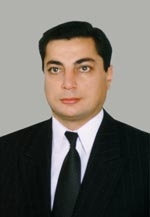 Vahram Baghdasaryan was born on June 15, 1961 in Vanadzor (Kirovakan).

He graduated from Yerevan State University in 1984 and the Foreign Economic Relations and Management Institute in 1998. He is a mathematician, economist, techni­cal sciences PhD, docent and doctor of economics. He is also USSR master of sports.

From 1984-1988 he worked as a scientific associate in Kirovakan Scientific Industrial Complex Ardavtomatika. In 1988 was elected secretary of the LCYU com­mittee of Vanadzor State Pedagogical Institute and in 1991 was appointed to a profes­sorship in the Chair of Mathematical Analysis. In 1992 he worked as a deputy director in the Industrial Union Vanadzor Furniture and in 1993 was appointed its general direc­tor. In 1995 he headed the Department of Informatics and Applied Sciences of Vanadzor Pedagogical Institute.

1995-1999 was his first term as a deputy in the NA (electoral district #60) where he was a member of the Reforms Deputy Group. 1999-2003 he served again in the NA (electoral district # 46) where he served on the NA Standing Committee on Financial-Credit, Budgetary and Economic Affairs. He was first a member of the Unity Faction, later was not involved in any factions or groups and then joined the “People’s Deputy” Deputy Group.

On May 25, 2003 he was reelected to the NA (electoral district # 37) and current­ly sits on the NA Standing Committee on Financial-Credit, Budgetary and Economic Affairs as a deputy head of the committee. He is also the secretary of the “People's Deputy” Deputy Group, he has no political party affiliation.

Mr. Baghdasaryan is married and has three children.