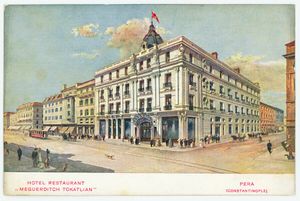 Postcard of the Pera Street hotel 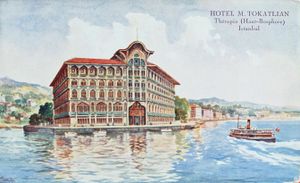 Postcard of the Bosporus hotel

Once home to the most elegants ball of the times, Ataturk's favorite Hotel, Tokatlýyan, is now facing an unknown future. Considered as a great piece of architecture, the hotel has been waiting for a restoration for the last 30 years.

Once a favorite haunt of modern Turkey's founder, Istanbul's legendary Tokatlýyan-Pera Hotel continues to face an uncertain future due to a lack of plans to renovate the severely dilapidated building.

"[Mustafa Kemal] Ataturk not only organized balls but also hosted his guests at a rich table during tea hours. It is so unfortunate that the hotel is now in a ruined state," Professor Afife Batur, a scholar on architectural history at Istanbul Technical University, recently told the Hurriyet Daily News. "The hotel was a pioneer as a building in many ways. The first known hotel posters in Turkey belonged to the Tokatlýyan-Pera."

Considered by scholars to be a significant architectural achievement, the Tokatlýyan-Pera is one of the best examples of fin-de-siècle architecture in Turkey.

The hotel belongs to the Uc Horan Armenian Church Foundation, one of the richest foundations of Turkey's Armenian community.

The foundation's administration, which has remained unchanged for 30 years, has chosen not to adopt any of the numerous renovation proposals that have been submitted over the years.

The hotel was built by Mýgýrdic Tokatlýyan, an Ottoman citizen of Armenian origin who migrated from the northern province of Tokat and adopted the last name Tokatlýyan. The hotel was opened in 1897 with 160 rooms and hosted a number of celebrities, later becoming a favorite of Ataturk.

Emphasizing the significance of the Tokatlýyan-Pera in regard to architecture, Batur said: "It was such a popular building that the Orient Express would transport all of Europe's high society and the elite to this hotel and elegant balls were held there. These balls would generate several stories for the world tabloid press as well as the Turkish press."

Another branch of the Tokatlýyan-Pera called the Tokatlýyan-Therabia was situated on the Bosphorus at the exact location of the present-day Tarabya Hotel, Batur said.

Architectural history specialist Dr. Fatma Sedes said the Tokatlýyan-Pera was the apple of the eye of Istanbul and European elites, as well as other political figures. "It was a unique building that left its mark on Istanbul's architecture," she added.