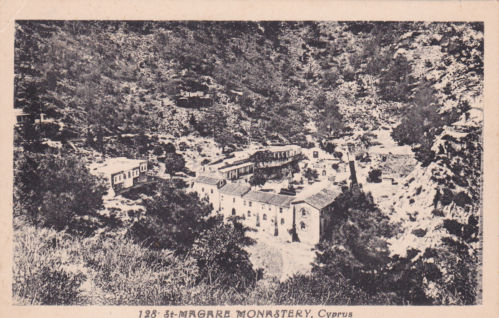 A slice of history left to crumble

THE FIRST THING you should know about the Armenian monastery of Sourp Magar is that it exists.

This is an important point, because if you look at virtually any “TRNC” map, or ask the locals in the north where it is, you might come away thinking otherwise - and be tempted to return home after a long and fruitless search. Its existence is also important is because, through woeful neglect by the ‘authorities’ in the north, this 1,000-year-old treasure and sacred pilgrimage site could soon fall into rubble and succumb to nature, vandals and the swathes of litter and used toilet paper that mar the area.

It is already half way there, as I found out when I visited last month.

Nestled deep in the Plataniotissa forest, 10 minutes drive beyond the Pendadactylos range, Sourp Magar is thought to have been founded by Coptic Christians in memory of Saint Makarios the Hermit of Alexandria in around 1,000 AD. By 1425 it came into the ownership of the Armenian Church, becoming a popular pilgrimage site and retreat for those en route to the Holy Land, and by the time the Ottomans arrived it had taken on the name “Blue Monastery” after the colour of its wooden shutters.

Back then, pilgrims would have trudged through nearly 8,500 donums of monastery owned olives groves from sea level to an altitude of 530m.

Its last use as a working monastery is thought to be around 1800, after which it fell into a variety of alternate uses, including a school, a safe house for Armenian refugees fleeing Ottoman massacres in the 1890s, a summer camp for scouts and then, after the 1974 invasion, a mess for invading Turkish officers and refuge for settlers.

Were any ancient Armenians to make the long hike today, however, they would be surely be horrified by what it has become.

Instead of maintaining the site, locals have made several attempts to turn it into a hotel - in 1998, 1999 and 2006 (each time caving in to pressure to stop by Republics of Cyprus and Armenia, the Catholicosate, the Vatican and the European Council) and it is now dilapidated ruin: unattended, unmaintained and open to vandals.

A few traces remain of these commercial efforts; a rickety picnic bench within the cloister, a basic kitchen in one room, visible through an open window, and an incongruous satellite dish on perhaps the last bit of sound roof. An ‘out of order’ sign hangs aptly on a broken toilet door and a bin full of rubbish, shamelessly dumped outside the main entrance are the only other signs that this place has been visited recently.

Wandering around the rest of the ruin is a haunting experience. Where at one time monks would stroll of the cloisters, only weeds grow. The stone paths feel unstable and every wall seems cracked and on the verge of collapse. I catch myself holding my breath as I pass under Gothic archways, hoping my footsteps don’t cause the ancient keystones to collapse.

I’m especially wary as I enter the tumbledown chapel, on the north side of the site. Its ornate tile flooring is still intact, but the room is bare, the font smashed and Turkish (and curiously PKK) graffiti daubs the whitewashed walls. The vestibule’s roof has gone, giving way to creeping plants and weeds.

Aside from the church, only two other features confirm I am even in the right place - they are two placards, written in Armenian script. The first is intact - most probably because it is set high out of reach of vandals and dated 1933.

Its tragically hopeful inscription, in Armenian script, reads: “Hail to you hill, temple of nature, allow your heap obelisk to be a reminiscence that preserves your novice name from century to century, long live the radiant great Mekhitar.”

The second placard -within the monastery walls - has been less fortunate, and has had mysteriously had the date of its placement scrubbed off.

In its heyday, this would certainly have been a highpoint on any pilgrim’s journey, but today it is has a post apocalyptic feel, and its demise another stain on Turkey’s legacy.

Yet there is a glimmer of hope that the building could be restored - if not to a working retreat - then at least to safety- if funding is found.

While now might not be a good time to obtain funding, similar restoration projects have taken place in Cyprus recently. For example, in 2009 the UNDP began a €2.6 million project to restore the Armenian Church and Monastery in northern Nicosia.

Asked about funding, Armenian community leader Vartkes Mahdessian said: “There is no funding for Sourp Magar monastery because it is outside of our parameters, and in our thinking, the church in Nicosia was more of an inter-communal place.”

The Armenian community has reached out to ‘authorities’ in the north in the past, but, as Mahdessian says, funding was the key issue: “We tried but they didn’t have the money. There is virtually nothing left there and the problem we now face is how to maintain what is left.”

This has not stopped local Armenians from resuming their pilgrimages, however, and in 2007 Mahdessian began organising annual trips on the first Sunday of May each year.

If you do decide to visit, there are a few more things you should know, the most important probably being how to get there. When I went two weeks ago, a no-doubt well meaning local told me it was near the Buffavento castle. Ignore anyone who tells you this, but do follow their directions as far as the Pendadactylos range. If you are approaching from the Nicosia (south) side of the range, turn right at the pass, before the Buffavento restaurant. This will put you on a narrow road that weaves past the Pendadactylos and through the Plataniotissa forest, which incidentally has several well marked and beautiful hiking trails starting at several points along the road.

After about ten minutes you should come to a clearing where you might spot a faded sign saying “Ermeni Monastiri” and you have arrived... well nearly.

To the north west, a tarmac road leads down the hill to the monastery. This is now often closed to cars, in which case you will have to complete the pilgrimage in the traditional way, and follow the road down the hill on foot for around 20 minutes.

YEREVAN, MAY 10, ARMENPRESS: Citing an April 17 story in Yeniduzen newspaper published in the Northern Cyprus, Armenian foreign ministry said an Armenian Saint Makar monastery, which is in the mountainous part of the island, was turned into a cafe. The newspaper said its new owner, Dervish Sonmezler, intends to rebuilt the monastery into a hotel.

The monastery was built in the 4-th century AD by Copts, but later it passed to Armenians and was for centuries an Armenian Church sanctuary. Though it was subordinated to the second Armenian Catholicosate in Antelias, Lebanon, the monastery maintained closed ties with Etchmiadzin.

Before the Turkish occupation of the Northern Cyprus the monastery was one of the favorite destinations for local Armenians, but now it is inaccessible to Christians. All manuscripts and other relics kept in it were plundered and sold and only the intervention of the Republic of Cyprus, the Armenian Church and international organizations prevented further destruction of the monastery.

A decision by the Turkish occupation regime to grant a "license" to operate a recreation centre in the Armenian Monastery of Surb Makar (Saint Makarios) in the Halefka area, north of the Turkish occupied village of Kythrea, has spurred a strong reaction by the Vatican.

The Spokesman noted that "various protests were made and there has been a reaction on behalf of the Vatican, which says and stresses in its verbal note that the attention of the competent Turkish authorities has been drawn to the specific case, as well as other lamentable incidences."

Chrysostomides added that this was "a severe response, which is not customary on behalf of the Vatican, and the language used is also stern against the occupation authorities."

"We totally agree and it is after actions by the government that the desecration of the monastery has come to the attention of the Vatican," the Spokesman pointed out.

His Holiness Aram I, Catholicos of the Great House of Cilicia Thursday visited the old Armenian Prelacy building and Sourp Asdvadzadzin church and the Sourp Magar Monastery in the Turkish-occupied part of Cyprus.

In the Turkish-occupied part of Nicosia, the Catholicos and his entourage first visited the old Prelacy building and Sourp Asdvadzadzin church, after which they toured the Melikian-Ouzounian school, where a memorial for the victims of the Armenian Genocide is erected. They also visited the old Armenian center, which has now been converted to a Turkish cultural center.

The Catholicos also toured the Sourp Magar Monastery in the Kyrenia mountain range, where a monument marking the 1933 visit by Catholicos Sahag II still stands.

Aram I spent more than six hours in the Turkish-occupied part of Nicosia, after which he also assessed the amount of work required following the reunification of the island.

Interview with Catholicos Aram I on Gibrahayer.com

- Coming to a second question on that. The UN.D.P. (United Nations Development Programme) plans on restoring Sourp Asdvadzadzin Church in Victoria str. (Nicosia). However, they haven't made another provision for the church of Ganchvor in Famagusta, or Magaravank. And Magaravank, unfortunately, is falling into pieces. Does your Holiness plan on asking the restoration of these churches?