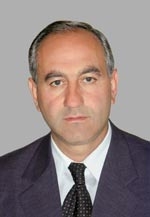 Mr. Avetisyan received his degree in civil engineering from the Leninakan branch of the Yerevan Polytechnic Institute in 1981. He finalised his post graduate studies at School of the Public Administration affiliated to the government of the RA in 2004. Doctor of Economics. He is academician of the International Academy of the Environment and Society Protection. He was awarded the USSR SC medal for excellence in work in 1981.

He served in the Soviet Army from 1982-1983. From 1981-1982 and then from 1984-1989 he worked as a secretary in the committee of the Lenin Youth Communist Union (LYCU) of the Leninakan branch of the Yerevan Polytechnic Institute, then as secretary of the LYCU of the Electrical Technologies Factory, thereafter as head of the organizational department of the LYCU Leninakan city council, and then first secretary of the LYCU Moskovyan regional council. From 1989-1990 he was an instructor in the Communist Party of Armenia Leninakan city council. From 1990-1991 he worked as a geodesist-engineer in the Shirakshin trust. The next two years he was chief engineer in the housing industrial department of Leninakan Moskovyan regional council. From 1994-1996 he served as deputy head of the Executive Committee of the Gyumri City Council and then head of the housing department. From 1996-1999 he was the deputy mayor of Gyumri.

1995-1999 was his first term of office as a deputy in the NA (electoral district # 52) where he was first a member of the deputy group Reforms and later Yerkrapah.

1999-2003 was his second term as a deputy in the NA (electoral district # 61) where he was a member of the NA Standing Committee on State and Legal Affairs and the Unity Faction.

On May 25, 2003 he was reelected from electoral district # 47. From June 2003 to September 2004 he was serving on the NA Standing Committee on Science, Education, Culture and Youth Affairs. Currently he sits on the NA Standing Committee on Social, Health Care and Environmental Protection Affairs. He is a member of both the Republican Party of Armenia Faction and party.

Mr. Avetisyan is married and has three children.