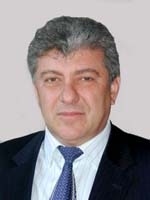 Seryoja Abrahamyan was born on January 1, 1953 in the village of Vladimirovka in the Altay Slavgorod region.

Mr. Abrahamyan graduated from the Yerevan Polytechnic Institute with a degree in engineering, constructor and technological expert of radio equipment in 1975.

From 1975-1976 he worked as an engineer in the Yerevan branch of the Yerevan Scientific Research Institute of Commutation Equipment. He spent the next decade as a head of the laboratory of the Yerevan Relay Technology Bureau of Planning and Technology. From 1986-1988 he was a deputy head of the control division of Yerevan Relay Factory. From 1988-1990 he served as a deputy secretary of the Relay Factory Party Committee in the 26 Commissaries Regional Council of the Central Committee of the Communist Party of Armenia. From 1990-1994 he was a chief specialist in foreign economic relations in Yerevan Relay Factory. From 1994-1997 he was a director of the Malishka branch of the state company Shoghakn, from 1997-2000 he was head of the AVA OJSC and in 2000 was president of the board of directors of the AVA Plus CJSC.

On May 25, 2003 was elected as a deputy to the NA from electoral district # 54 and serves on the NA Standing Committee on Foreign Relations. He is a member of the Rule of Law Faction and has no politcal party affiliation.

Mr. Abrahamyan is married and has two children.