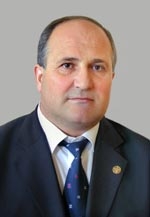 Samvel Nikoyan was born on February 13, 1958 in the village of Sarnaghbyur in the Ani region.

Mr. Nikoyan graduated with a degree in engineering-mechanics from Yerevan Polytechnic Institute in 1982.

From 1982-1990 he worked as an engineer-constructor and later as a senior engi­neer, head of division, deputy head of unit and eventually head of production in the Yerevan Hydro Apparatus Plant. From 1991-1994 he was the president of the Salik Cooperative Firm in the Ani region. In 1995 he was the assistant to the chief engineer in the Yerevan Experimental Machinery Plant. For the next three years he was a head of division in the Armenia Chamber of Trade and Industry. From 1998-2002 he was the deputy director of Haymamoul CJSC.

Mr. Nikoyan is married and has three children.