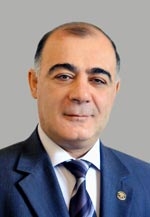 Samvel Balasanyan was born on October 12, 1954 in Gyumri (Leninakan).

Mr. Balasanyan graduated from the Nalbandyan Leninakan State Pedagogical Institute in 1976 and the Moscow Food Production Institute in 1983. He is a teacher, mathematician and food technologist.

From 1976-1977 he served in the Soviet Army. In 1977 started his career as a work­er in the Leninakan Beer Factory and in 1978 was appointed technologist in the Confectionery Factory. From 1992-1999 he served as appointed director of the Beer Factory.

1999-2003 was his first term as a deputy in the NA (electoral district # 63) where he served first on the NA Standing Committee on Social, Health Care and Environmental Protection Affairs and later on the NA Standing Committee on Foreign Relations. He was first a member of the Stability Deputy Group and later People's Agricultural and Industrial Union.

Mr. Balasanyan is married and has three children.