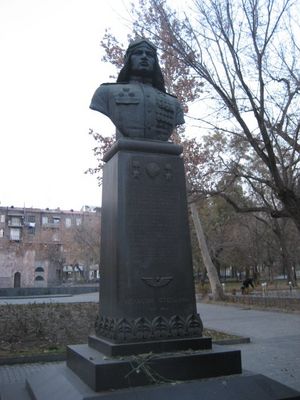 Nelson Gevorkovich Stepanyan (1913-1944), - fought as a dive bomber pilot during the second World War in the Soviet Red Air Force. He was twice awarded with the military title of the Hero of the Soviet Union, the highest title in the former USSR.

Stepanyan was born in Shushi, Karabakh in 1913, but moved with his family to Yerevan, Armenia at an early age. During the war lieutenant-colonel Stepanyan fought on the Baltic Sea front. He carried out 229 flights, and was reported to having destroyed 78 German trucks, 67 tanks, 63 anti-aircraft guns, 19 mortars, 36 railroad cars, 20 merchantmen and warships (including a naval destroyer) 13 fuel tankers, twelve armored cars, seven long-range guns, five ammunition dumps, five bridges.[1] Although shot down over enemy lines, friendly guerilla fighters aided him to reach back Soviet lines. Stepanyan was called "Storm Petrel of the Baltic Sea" and was awarded twice with the title of Hero of the Soviet Union, the latter posthumously. On his final mission sortie, when wounded and with a damaged plane, he rammed his own plane into a German naval warship.

There are two statues dedicated to him: one in Yerevan, and the other in his home town of Shushi, however, the latter of which was destroyed by Azeris. A new one was dedicated on May 9, 2000.